You are here: Home » Wine » 26.2 miles of aches, pains, and a delicious Champagne

*Disclaimer:  This post has very little to do with wine and a lot to do with my potty mouth

You know those people, at the end of a marathon, who limp pathetically towards the finish line in what looks like slow motion, looking like they are about to throw up any second, with an intense pale look of death upon their face?  And when you watch these people you can’t help but think to yourself, “Jesus, that person looks awful. Why the hell would anybody willingly put themselves through that kind of torture?”

Well, that is what I looked like this past Saturday as I crossed the finish line of the 2011 ING Hartford Marathon.

About a week ago (pre-race) when I was planning out this post-race blog post, I pictured something entirely different.  I imagined I would be writing about how great the race was, how all my training paid off, how it was hard but I met my goal time and it felt great…. Etc. Something very short and sweet ending with a detailed description of the delicious celebratory Champagne I would indulge in later that day.

But I’m afraid that’s not the case.

There was really nothing rosy or pretty about the experience at all.

To backtrack a little bit.  About four months ago I signed up to run the ING Hartford Marathon.  Throughout the summer I followed a strict training schedule and stuck to it closely (even if it meant running in the rain, wind, a hurricane, extreme summer heat and humidity).  Overall I trained a total of 422.5 miles, 112.5 of them while pushing my growing twins in a double running stroller.   I rarely swayed from the running schedule.  I had good equipment (i.e. shoes and clothing), I didn’t experience any injuries during the training nor did I experience any unusual pain (with the exception of some minor foot pain towards the last two weeks of training).  I felt healthy and well prepared…. So what the hell happened to me at mile twelve?

The race started off great. I intentionally started off slow. I knew from previous training runs that I typically start off much faster then slow significantly towards the end, so I decided to follow the pace runner closely so that I didn’t exhaust all my energy in the first half.  I was rocking out to my running playlist and feeling good.

Then around mile twelve I started to feel some sharp pains in both of my knees.  A pain I was all too familiar with (from an injury years ago) but hadn’t experience not once during the training for this marathon.   I thought maybe my legs were just tight and needed to warm up since it was fairly chilly and windy out so I stopped to stretch and take a couple ibuprofen. The minute I started running again the pain pierced me again.  With a vengeance.

“WTF” I exclaimed. “It’s not even the halfway point, why is this happening?!”

I stopped again to stretch and rub my knees, then started back.

By mile thirteen I knew this wasn’t going to go away anytime soon.

Again I stopped, stretched, swore, and started running again.  It went on like this for the next seven miles.  The pain was sharp, and at times excruciating, and all I could think about was how frustrated I was.  At mile sixteen and a half I saw my pace guy passing the mile eighteen mark.  I was already close to two miles behind him and extremely frustrated.  I wanted to call it quits.

It was at mile twenty when things started to turn around.  Sort of.

It was at that point I decided to stop for a minute to take a picture of the 20-mile marker, give myself a pep talk, and regain my composure. This was now the very longest I had ever run in my life, I needed to take that in and try to appreciate it.  I knew my knees were already effed up.  I had been running on them for eight miles like that…. So what was another six, right? 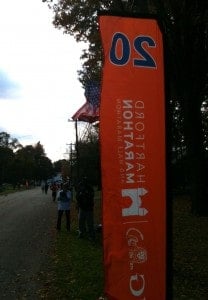 I decided to pop my remaining ibuprofens (probably not advisable, but hell, neither is running on damaged knees), looked at the 20 mile marker banner one more time, lifted up my middle finger and shouted “eff you twenty miles!”  I then proceeded to turn up the volume on my iPod to its loudest setting, turned on my marathon mix, starting in the middle with “Eye of the Tiger”, and continued on my way.  I stopped listening to the pain in my knees and started listening to the music instead. Cheesy, yes, but it worked to get me in a different state of mind.   The way I saw it the music was so flipping loud that I couldn’t really hear anything else, not even my own negative thoughts.

So off I went… delirious and sore but determined to finish.

Then I hit mile twenty-two.  “Four miles left you say?  Whatever, I can push a running stroller with fifty pounds of weight on it for four miles. So Eff you mile twenty-two!”

I really had this dialogue going on in my head.  I kid you not.

Then I found myself running the final mile!  A mile that felt like a year.  Running uphill over the Founders Bridge into downtown Hartford through strong wind gusts, I found myself shouting “eff” with every step.   At one point another runner looked over at me and said “I heard that”.  So I snarkily responded, “Yeah I’m sure you’re not the only one”, and continued on my swearing way.

It was almost over.  Finally

What felt like hours later, I was finally entering the final stretch, limping, swearing, and tearing up.   And then I saw this just before I crossed the finish line … 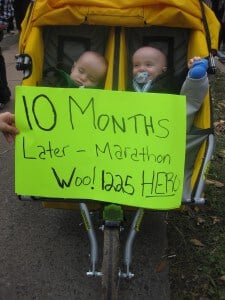 And it was finally over.

I was now ready to go home, take a long bath and drink a cold beer, which is exactly what I did followed a celebration with friends involving Champagne, chocolate cake, and pulled pork sandwiches cooked up by hubby.

What kind of Champagne you may be wondering?

The funny thing is, before the marathon I imagined I would have slowly sipped the Champagne, taking notes on every nuance of its aromas and flavors.  But I didn’t.  I just drank it and loved every last sip.  There are some wines you want to describe, write notes on, and discuss with others who are sharing it.  And there are wines you just want to drink and enjoy knowing that you earned every last sip of this divine treat.  This was one of those.  And it was delicious.

Finally, I want to thank my biggest cheerleader and the one person who made it possible for me to get through the (often grueling) twenty weeks of training for this – my hubby Sean, who got up early every single Saturday morning to take care of the boys while I went off to do my training runs.  He never once complained, never expected anything in return, and always encouraged me to do my best (even on the days where it was raining and I would spend half the morning whining and procrastinating by coming up with lists of why I shouldn’t run that day).   He even rallied up my fan club to cheer me on at the finish line and showered me with gifts (including the Champagne and chocolate cake below).  Without his support and “never give up” attitude, I would not have been able to follow my training program as successfully as I did and finish the race.  He even massaged my aching knees and feet after the race 😉

In retrospect, though I was frustrated the marathon didn’t go as well as I hoped or imagined I have to be proud of the fact that, just ten months after giving birth to twins, I ran a friggin’ marathon!  That’s no small feat.

And although I didn’t finish in my goal time, I DID FINISH, and in under five hours.  Not too shabby for a first timer I suppose.