You are here: Home » Wine » Red Wines » A Grape By Any Other Name… Is it Spätburgunder or is it Pinot Noir? 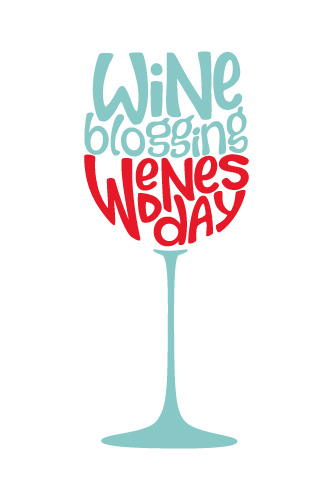 Wine Blogging Wednesday, created by Lenn Thompson from Lenn Devours: The New York Cork Report, encourages bloggers to write a post based on a selected theme of the month chosen by a rotating host.  This months Wine Blogging Wednesday (#62 officially, but only #2 for me) is hosted by Dale Cruse from the blog Drinks Are On Me.  The challenge this month was taste wines labeled with their lesser-known varietal synonyms.  Some of the examples given were encouraging participants to drink a Primitivo instead of Zinfandel, or a Shiraz instead of a Syrah, or to taste a wine with different name based on the region it is from, like Sauvignon Blanc vs. Sancerre (as it is known in a specific area within the Loire region of France).  Myself, I took this as an opportunity to do something few Oregonians proudly do… try Pinot Noir from outside of Oregon!  No, not from California, and not from Burgundy… Drumroll please…

I chose to write about Pinot Noir from Germany, otherwise known as Spätburgunder.

When most people think of Germany they think of Riesling and unfortunately many wine consumers have the false assumption that German wines are sweet when in fact most fine German wines are technically dry.  To me that assumption is as bad as categorizing all Chardonnays as oak bombs (don’t do it people, or you’ll get a nice long lecture from yours truly). And although most grapes planted in Germany are white, there is a good amount of Spätburgunder (Pinot Noir) planted, which is also the most widely planted red grape in the country.

I think many of the misconceptions regarding German wines stem from a lack of education on German wines here in the US.  I also found, before sitting for my Sommelier exams, that German wine labels can be intimidating (not to mention difficult to pronounce).  But with a little bit of study, a basic understanding of the label system in Germany may lead one to discover new and interesting wines that debunk many of his or her once held stereotypes.

Let’s start with the basics.

German wines are governed by a set of laws, started in 1971, much like other European countries (like France and Italy), but unlike those two, they also specify the qualities of wine like the ripeness factor of the grapes, as well as any sweetness in the wines, in addition to terminology permitted on the label.

The lowest level of quality categories is a Tafelwein (table wine), which is the most general and basic category.  These wines must be made from grapes grown in Germany in one of five general areas.   Landwein is of a higher quality than Tafelwein and are grown within fifteen regions.  These two levels are rarely exported into the US.

Qualitätswein bestimmter Anbaugebiete (QbA) The second highest of the four quality categories.  These wines are regulated in terms of sugar allowed to be added at harvest time, and must come from one of 13 specified Anbaugebiete (regions) for a QbA wine.  Those 13 regions are as follows: Ahr, Mittelrhein, Mosel-Saar-Ruwer, Rheingau, Rheinhessen, Nahe, Pfalz, Hessische-Bergstrasse, Baden, Franken, Württemberg, Saale-Unstrut, and Sachsen.

Kabinett:  Wines picked during a normal harvest.  Typically the least sweet of the six categories.
Spätlese:  Meaning “late harvest”, grapes that were picked later in the harvest, left on the vine to fully ripen.  These wines will typically have some sweetness to them.
Auslese:  meaning “select harvest”, grapes that were selected to be left on the vine in order to become over-ripe.  These wines will be much sweeter and should be consumed as a dessert wine.
Beerenauslese:  Meaning “berry select harvest”, specifically selected berries (grapes) that were left on the vine and have been affected by the noble rot.  These are rare wines and do not happen in each vintage and are usually expensive.
Eiswein:  meaning “ice wine”, over-ripe grapes, not affected by the noble rot, that have frozen on the vine.  The grapes are then picked frozen and pressed.  The resulting juice is sweet and concentrated.
Trockenbeerenauslese: meaning “dry berry selected harvest”, these are the richest, sweetest and most rare of all German wines.  They are only made in the most exceptional of years by grapes affected by the noble rot (botrytis).

Starting to make sense?
Now let’s get to our wine! 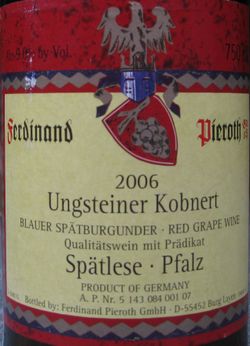 Translation: Ferdinand Pieroth is the producer.  Ungsteiner Kobnert is the vineyard the grapes were sourced from, Spätburgunder, which we have learned, is the variatel (otherwise known as Pinot Noir), Spätlese meaning late-harvested grapes, Pfalz is the region (Anbaugebiete), QmP lets you know it is of the highest quality wine category.  We good? Yes!

I received this, my first bottle of Spätburgunder, as a gift a couple months back from some friends of mine.  Although I didn’t buy it I found some online retailers selling it for approx $26.99 and is distributed through PRP Wine International.

I first opened up this wine at room temperature.  Upon my first glass I wasn’t the biggest fan of it.  Honestly, if I had been blindfolded, I would have thought it was a room temperature rosé.  The wine seemed too light and fruity to be served at room temperature.  At the recommendation of the friends who gave me the wine I put it in the fridge for about 20 minutes to give it a slight chill.  When I poured my next glass (slightly chilled) the wine took on a whole new feel.  It smelt of bright cherry, raspberry, and sweet strawberries.  It was like a sweet red fruit explosion.  In the mouth it was lively and acidic with more red berries, finishing with slight sweetness and lingering acidity.   I normally wouldn’t have chilled a Pinot Noir, but this one was not only very light in color but also in body and alcohol content (9%) and by chilling
the wine it took on more characteristics of a rosé of Pinot Noir rather than its darker bolder counterparts in other regions of the world.  Chilling the wine also allowed for natural acidity in the wine to flourish.   Plus it made for a fantastic brunch or daytime wine (at 9% alcohol it is a great daytime wine that won’t make you sleepy after a couple glasses).

This was a great way to explore a varietal I am very much familiar with, Pinot Noir, from a region I wouldn’t normally drink it from.  I wouldn’t say I would compare it to any Pinots from Oregon, California, or even Burgundy for that matter, but it was a unique take on a varietal I drink all the time and I really enjoyed it.  It makes me curious to explore more Pinot Noir’s from other regions in the world to see how place makes a difference on the wines overall taste.  I think, especially for Pinot Noir, the region the wine was made makes a world of difference in the overall flavor and experience of the wine.  The wine growing regions in Germany, for example, are situated in some of the most northerly wine regions in Europe, at around 50 degrees N, which makes a huge difference on the final product.  For me it was one of those reminders to withhold my assumptions of what Pinot Noir “should” taste like and leave those assumptions at the door, and instead allow myself to really experience how terrior influences the wine.

As for other “grapes by any other name”, make sure to check in on Dale Cruse’ blog for the roundup of other write-ups submitted. 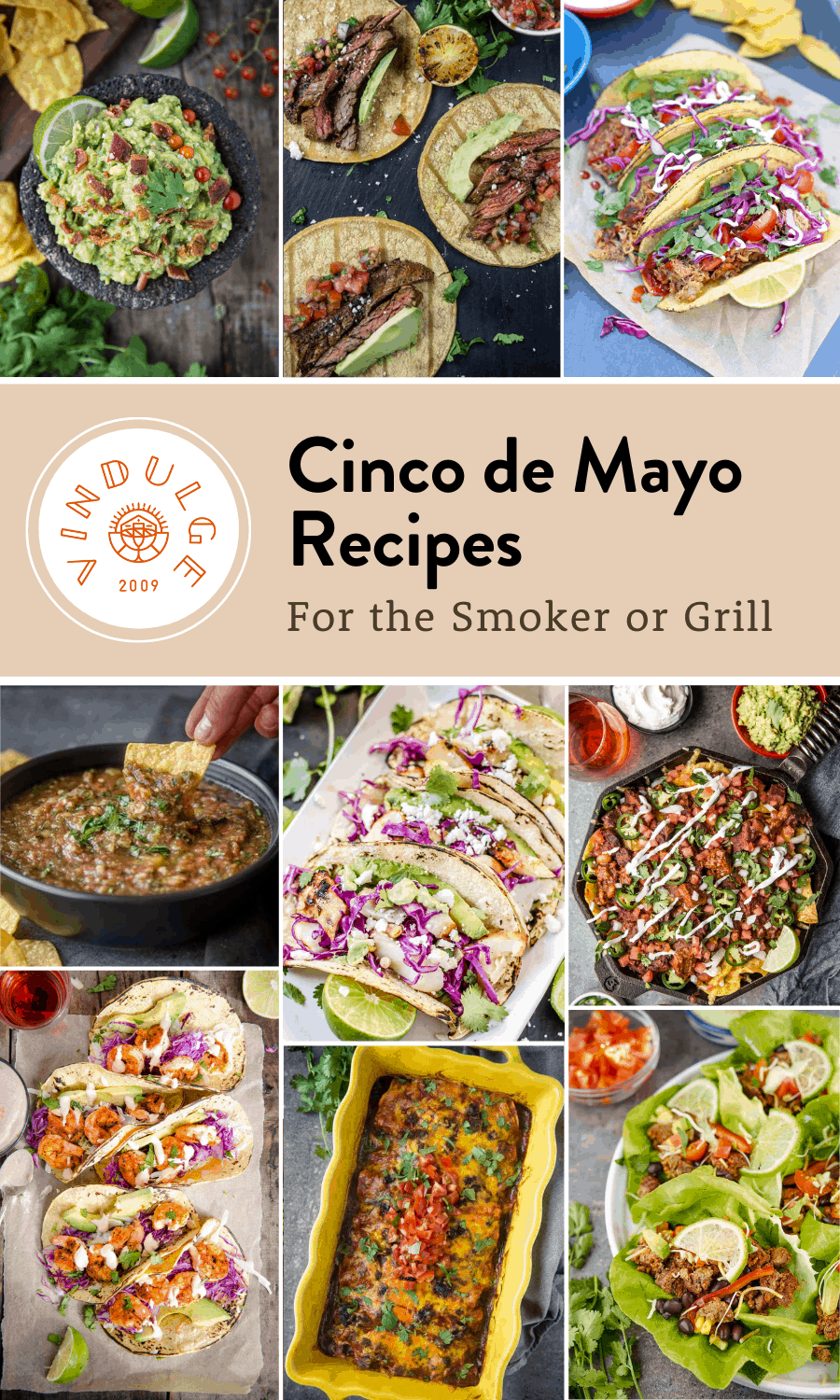 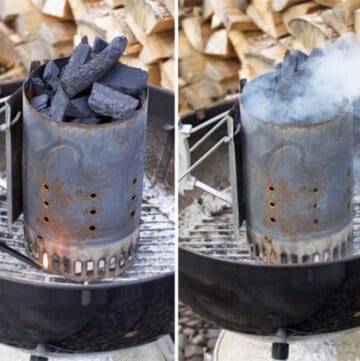 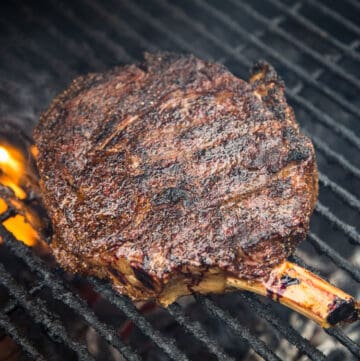