You are here: Home » Food and Drink » Open That Bottle Night, part II: Even special wines are meant to be opened

This past Saturday I did something I’ve been putting off for a long time.  Inspired by Open That Bottle Night (OTBN) I opened two bottles of wine that I never quite found the right occasion to do so.  They were not my most expensive, rare, or oldest wines. They were just wines that had a lot of meaning to me.

Created in 1999 by Dorothy “Dottie” J. Gaiter and John Brecher, the former writers of the Wall Street Journal’s tastings column, OTBN encourages wine lovers from all over the globe to stop putting off opening up that special bottle of wine and just drink and enjoy it already!  When I heard about the dates for this year’s OTBN I knew exactly which two bottles I needed to open.  It was figuring out what to make for dinner that night that took contemplation. 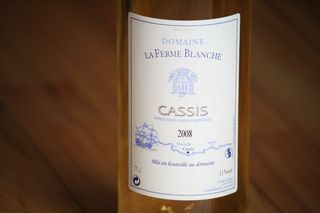 The first bottle we opened was given to us by our former next-door neighbors in Portland just before we moved to Connecticut.  To back up just a little bit – I spent the better part of four years trying to get Stephanie, our neighbor, to drink white wine.  She, a self proclaimed “red wine only” drinker, hadn’t found a white wine she liked, so it became a mission of mine to change that.  Her husband, Dan, drank sparkling wine on occasion, but also didn’t really drink white wine (nor red for that matter, but that’s another story).  I had almost given up on both of them when it happened. Their white wine “a-ha” moment.

Stephanie went to southern France this past summer on a work-study program for three weeks in Marseille (in Provence), and Dan joined her for a week.  Upon their return they gave us this bottle of wine. A white!  They both raved about the food and wine they experienced in Provence and how they fell in love with the white wines there.  They had their “a-ha” moment (finally)!  I couldn’t have been more happy for them and I couldn’t wait to try the bottle.

That’s what wine is all about for me. That moment; when the experience of being surrounded by the culture can change your perspective (and taste) about a wine.  I could only imagine the two of them sitting in an adorable French café, in the sun, overlooking the Mediterranean sea, eating the freshest seafood and drinking the local wine.

I wanted so badly to share that bottle with them and hear stories of their trip to France.  But alas, time caught up to us and before we knew it we were packed up and rushing to Connecticut and never got to open the bottle together.  So I held onto it… and couldn’t think of an appropriate occasion to drink the wine since… 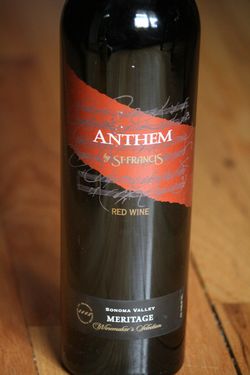 Our other bottle was chalk full of memories of when we lived in San Francisco (where we lived before moving to Oregon).  You see, St. Francis Winery was one of the first wineries we visited on our very first trip to Sonoma in 2001.  We joined the wine club right off and remained members until we moved to Oregon in 2006.  Most trips to Sonoma, whether it was just the two of us or with friends and family, involved a stop at St. Francis where we would enjoy their food and wine pairing experience.

Then, one day, they released a new wine, “Anthem” they called it.  A “reverse Bordeaux blend” consisting of mostly Petit Verdot and Malbec with small amounts of Cabernet Franc, Cabernet Sauvignon & Merlot (as opposed to a traditional Bordeaux blend where Cabernet Sauvignon and Merlot dominate the blend with Petit Verdot and Malbec playing minor roles).  The staff was very excited to showcase the wine but they didn’t have any open that day.  So we decided to buy a bottle, open it right there on their deck, and share it with the staff and anybody else who wanted a sip.  That’s what wine is all about anyways, sharing it!  It was an awesome afternoon.

Since that first release (which was their 1999 I believe), we always bought a couple bottles of the Anthem to have on hand.  Our last trip before we moved we bought a couple bottles of the 2002, and after moving to Oregon we dwindled down to one bottle very quickly.   For months anytime I asked to the hubby “what do you want to open tonight”. His response was always “the Anthem?”.  “No”, I would respond, “I want to wait until we can find a good meal to pair with it”, or “It’s not an ‘Anthem’ night”, or a simple “I’m just not feeling it”.  Months became years, and he still brought up that wine each and every time like clockwork.  It became almost comical.  At the time I didn’t really know what was holding me back, but now I do.  It was one of the last bottles we bought before starting our life in Oregon.  I think somehow it was my connection to our life in San Francisco.  It certainly wasn’t our oldest wine from our time in CA (vintage wise), and still isn’t, it was just the individual bottle that I had put off drinking the longest and had such good memories assiciated with it.

When I thought about OTBN and what to drink, I knew immediately it had to be these two bottles.  To me, opening up both these wines somehow represented change and transition.  Something difficult to do, but important nonetheless. 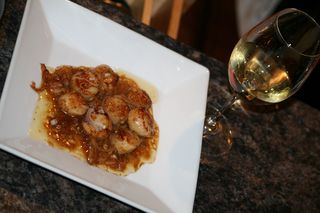 We paired the Cassis with an appetizer of seared scallops with shallots, butter, and wine in honor of the region the wine came from.  Fantastic!  The wine had a rich fruitiness, herbal, and mineral character to it that was the perfect compliment to the sweet and savory scallops. 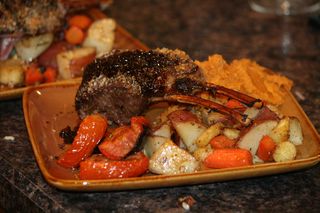 For the Anthem, we made oven roasted rack of lamb with an herb and panko crust and a balsamic wine reduction drizzle.  Along side the lamb we roasted an assortment of vegetables (potatoes, onions, carrots, parsnips, and tomatoes).  We wanted to honor the wine with a delicious and solid pairing, and this certainly did the trick.  The wine was rich, but not too tannic, with a depth of flavors that was enhanced by the flavors of the lamb, the sweet sauce, and the roasted vegetables.

We finished the night with homemade chocolate pots de crème, which is basically chocolaty rich custardy deliciousness!  I never seem to remember to take pictures of dessert as I must be too busy devouring it!

It was an awesome meal, paired with delicious wines, shared with my favorite guy.  A great evening and an even better reminder that wine is meant to be opened and shared, not tucked away in storage… especially those special bottles that remind you of a particular person, place, or time in your life.

Finally, drinking these wines was a delicious reminder of the good times we spent living in both San Francisco and Portland, and a toast to the many adventures to come.

I secretly think the best part of the night was that our twin boys (now three months old) were both sound asleep the entire time, allowing mommy and daddy to truly enjoy the evening together!  Thanks guys!

Do I regret opening the wines?  Not for one second. And I can still keep the memories alive by saving the empty bottles and putting them on display on my bookshelf with other memorable bottles I have collected over the years.

Now I have to know. Did you open up a special bottle of wine for OTBN?
If so I would LOVE to know what wine it was.