How many times have you (or someone you know) said “oh how cool would it be to own or work in a vineyard”?  Don’t lie; you know you’ve said it at least once!  I am here today to tell you a little story about how UN-sexy it is to work in a vineyard.  Only technically it is not “my” story, it’s my husbands.  But I’ve had to sit through it so many times that I can tell it better than him!

My husband and I have both been into wine as long as we have known each other.  He works in insurance, I work in the wine industry, so whenever he can he likes to live vicariously through me.  That’s fine with me, because I get insurance benefits not granted to me by working in the wine industry.  Fair trade!

During my first year working at a winery, Ponzi Vineyards, they were looking for volunteers to help out in the vineyards during harvest.  When I shared this information with my husband he ecstatically volunteered away all of his free weekends so he could work in the vineyards and do his part to help create god’s nectar.  Little did he know what was in store for him.

After the first weekend (I personally had to work weekends, so my volunteering hands were unavailable… oh darn), he came home exhausted and complaining of having broken two toenails… ouch!   Apparently he was not wearing appropriate shoes. As a result the toenails ended up dying and took an entire year to grow back!  Not a pretty sight.  He said it was the hardest work he had ever done in his life.  You see, a day in the life of working in a vineyard during harvest (or at least in his experience) is something like this: 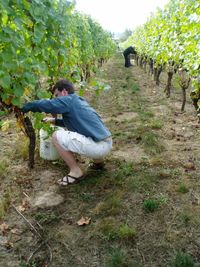 Show up to the vineyard by 5:30am.  Vineyard locations were hillside, near the Ponzi homestead in the Willamette Valley, with the most breathtaking views of Mt. Hood, Mt. Jefferson, and others.  That’s where the romance ends. It was cold and awkward for my husband as it was his first time.  There were lots of workers huddled around waiting to get started.  Sean’s job was to punch cards.  You see, each worker received a punch card and a bucket.  They got paid by the number of full buckets they bring to the large bins.  Each time someone would run up and dump their bucket of grapes Sean would punch their card, and this repeats over and over at a very fast pace until it was time to stop at approximately 3:30pm each day, with a brief lunch break midday.  During this particular weekend that Sean helped he worked with both Maria Ponzi and then vineyard manager Jason Tosch.  While buckets were being dumped into the bin, Maria, and other volunteers, would diligently pick out leaves and other foreign objects from the bins before they showed up to the winery for additional sorting.

You get dirty. You get sticky. You get sore.  You get tired.  The sun beats down on you.  It is truly hard work!

The workers worked their asses off. They would run as fast as they safely could, up and down the vineyard hills with heavy buckets full of grapes, and they would do this for weeks!  Those who worked the vineyard were often entire families; mothers, fathers, aunts and uncles, and this gave Sean an incredible sense of community, hard work and discipline that occurs in the fields and eventually goes into your glass.  He developed not only an appreciation for how hard the vineyard workers worked, but also for Jason and Maria’s attention to detail towards the work and those who toiled in the vineyards.  They were very attentive to the workers and very disciplined in the care that the grapes received as they were being harvested and treated the grapes as delicately as they could. 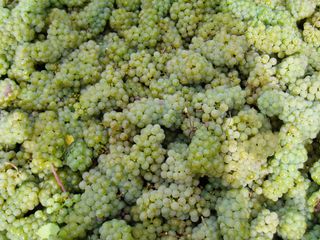 In only one weekend of working in the vineyards my husband came home with two dead toenails, which, as I mentioned, took an entire year to heal.  Ouch.  Guess he should have listened when I told him to wear good shoes!  He also came back with an incredible sense of appreciation for the many layers that go into the wine making process and the people who work endlessly for hours, days, and weeks, to create a quality bottle of wine.

I was visiting Ponzi just a couple weeks ago with some friends and noticed they still had some 2006 Reserve Chardonnay, the vintage that Sean helped work, made by some of the grapes he helped harvest.  So I thought, as a reminder of his hard weekend of vineyard work, I would surprise him with a bottle as a present.  I thought he would hold on to it for awhile… but no!  He immediately put it into the fridge and we opened it last night.

2006 Ponzi Chardonnay Reserve
Retail:  $25 (purchased on sale from the winery)

This was kind of a sentimental bottle considering I was working at Ponzi during the 2006 harvest and Sean worked his weekend in the vineyard, so I was excited to drink it.  This was my first time tasting this particular vintage of the Reserve Chard but I had always enjoyed previous vintages.  This one was pretty solid.  It had lots of hazelnut, melon, and baked apple pie on the nose followed by a medium bodied mouthfeel with minerals, spice and vanilla undertones.  The wine finished with crème brûlée flavors lingering on the palate.

This Chardonnay was fermented in the barrel and underwent 100% malolactic fermentation.  The wine was then aged 18 months in barrel with an additional 6 months of bottle aging before release.

Although I think I did enjoy previous vintages a bit better than the ’06, it was still a very pretty wine with a nice medium body.  It has that slightly oaky-buttery style balanced with rich minerals and fruit.

The next time you pick up a glass of wine from a fine producer, I encourage you to pay respect to the hours and the labor of love that starts with the harvest.  And if you ever think about working in a vineyard during harvest make sure you know what you are getting yourself into… oh, and wear good shooes!

*Ponzi Vineyards is also an active supporter of ¡Salud!:  “A unique collaboration between Oregon winemakers and healthcare professionals to provide access to healthcare services for Oregon’s seasonal vineyard workers and their families.”  To find out more about  ¡Salud!  click here

« Who’s Your Julia?
The perfect bubbles for a Girls’ Night! »