You are here: Home » Education » How to make a Spanish Carajillo…

How to make a Spanish Carajillo

…or rather how I learned the proper way to order coffee in Spain, and a recipe for a Spanish Carajillo and other Spanish coffee drinks.

On our second day in Spain several years ago, our group enjoyed a fantastic two hour long lunch at Loreto Restaurant in Jumilla with the winemakers and winery representatives we met thus far on the trip. While I could have easily drifted into a long nap following such a treat, we still had work to do and wineries to visit that afternoon. So when our server came around to see if anybody wanted coffee my eyes lit up. “Si! Por favor.”

When she asked what I wanted I attempted to order a Macchiato, which in Italy is a shot of espresso with a small amount of milk. She looked confused. Probably because we weren’t in Italy. Good one, Mary.

I then tried to say, in almost a whisper, “espresso con un poco leche.” Another awkward pause… I then asked (in what felt like slow motion), “Hmm, how about café con poco leche?”
I never said my Spanish was anything to be proud of!

The gentleman next to me kindly interrupted my interaction to explain to our server that I wanted a “blablabla…” Or, at least that’s what it sounded like to me at the time. After our server left he turned to me and explained that what I was trying to order was called a Cortado in Spain.

“Ahhh, a Cortado!” I then thanked him immensely for my quick Spanish lesson. That man was Loren Gil, from Gil Family Estates and Bodegas Juan Gil. We had visited his winery the day prior, located in Jumilla.

Café Cortado – espresso with a drop of warm milk.

He then continued; “Now you know Cortado. If you were finishing up dinner, you would want to order a Belmonte – coffee with milk [pause] and brandy,” he smiled and slyly winked his eye. “Buuuuuut,” he went on, with an even larger grin this time, “if you wish to go dancing after dinner you must order a Carajillo — coffee with brandy, no milk. You can’t drink milk then go dancing.”
Makes sense 😉

I wrote down the names of the coffee drinks and promised him I would try a Carajillo at my first opportunity.

Two days later, at Molino de Abajo restaurant was our final lunch in Spain; a gathering of all of the winemakers and reps we met during the whole week, for an incredible feast and my first and last paella of the trip.

This lunch lasted even longer than that first one (more than three hours), and this time Gil was now sitting directly across from me at our table. At one point during lunch he asked, “So, Mary, have you had a Carajillo yet?”
“Not yet”, I said almost pouting, feeling slightly ashamed I hadn’t tried this Spanish treat yet.
“Well today will be your first!” he determined.
And after lunch Loren Gil ordered me my first Carajillo.

The Carajillo, at last!

The server presented me with espresso in a small shot-like glass, a few packets of sugar, and a bottle of rum. Yes, an entire bottle. Apparently this is a DIY drink.
“Rum?  I thought you said Brandy?” I asked Gil.
“Eh,” he shrugged his shoulders as if to say ‘who cares’, “it does the same job,” then smiled as he watched closely as Luis Reynolds of Bodegas Bleda (who was sitting directly next to me) prepared my drink.
He poured one sugar packet into my coffee, “to take the bitterness away from the espresso and sweeten it up,” he explained. He then filled the rest of the glass with rum.
I drank it warm.

Arriving back at home I couldn’t wait to recreate the drink.  It wouldn’t be the same without the three-hour lunches I was used to, nor the company sporting their irresistible Spanish accents, but I would try.

I saw several variations online with the brandy prepared at the bottom of the glass and the layer of coffee floating on the top. They looked very fancy. I decided, instead, to do it the way my new friends taught me – no frills. Besides, it all ends up in the same place anyway, right?! I’m sure Loren would have approved.

I don’t have an espresso machine at home, so I made a small cup of strong coffee with a French press, poured a shot into my glass, stirred in a bit of raw sugar on the rim vs inside the glass (though you could do either way) then finished it with some Oregon Brandy from Clear Creek Distillery (I had to give it a little Pacific Northwest touch, can ya blame me), for a little Spanish-Oregon fusion. It hit the spot. The Apple Brandy gave it a slightly sweet tang, but was balanced and mellowed by the 8 years it spent in oak, and blended well with the strong coffee. It wasn’t quite the same as my Carajillo in Spain, but it was sure close.
A drink that will now always remind me of Spain.

Whether or not I went dancing after my Carajillo … well, that is a story for another day.

How to order Spanish Coffee Drinks 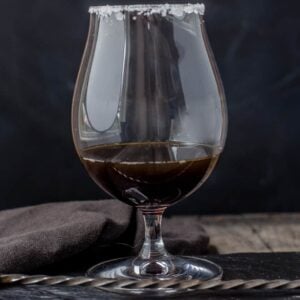 Tried this recipe? We would love to see!Mention @vindulge or use the hashtag #vindulge!

Thank you to Loren Gil, of Gil Family Estates for my valuable lesson in Spanish coffee.  I will remember this forever.

*This post was originally published in August of 2013, and updated in October 2018 with updated photos. 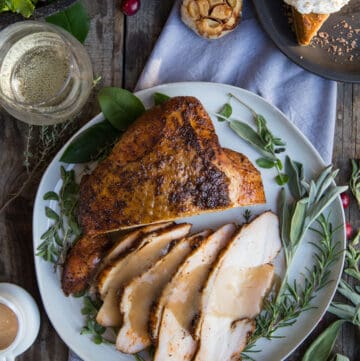