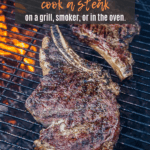 Reverse Sear is simply THE BEST way to cook a steak, both low and slow and hot and fast to get the perfect balance of tenderness and flavor crust. This detailed guide walks through the various styles of reverse sear techniques from the smoker and grill, to the oven.

What is Reverse Sear?

Reverse Sear is a method of cooking meat at a low temperature first, followed by finishing the meat at a high sear until desired finishing temperature. The method is adapted from restaurants where a chef will start a steak in a pan over high heat, to get the initial sear, and then finish in the oven until the meat is done. Hence why the method is called “reverse sear,” as it’s essentially the opposite way they are cooked in a typical restaurant.

How to Reverse Sear on a Grill (or Smoker)

This is the best way to cook a steak. We don’t say that lightly and we know that simply grilling a steak is great. But when you add the smoke element it truly elevates the flavor. The steps to get the best steak in the reverse sear method are as follows:

How to Reverse Sear in an Oven

The same principal applies to the oven as the grill and smoker. Start by seasoning the meat and place in an oven at lower heat, 225 degrees F. Add the meat to the oven until the internal temperature reaches 10 degrees less than your desired finishing temperature. Remove from the oven and then finish the steak over high heat in a pan on the stove top.

Then let it rest 10 minutes, slice and serve.

Best Thermometers for this Method

Thermoworks Smoke Unit – This unit is designed to monitor two zones while cooking. One probe will monitor the ambient temperature of your smoker, the other probe will go into your meat. This is the best way to know exactly when to pull the meat off the smoker and is best suited to use during the smoking phase of reverse sear.

Thermoworks MK4 Thermapen – We have used this instant read thermometer for years. It is hands down the fastest and most precise thermometer in the market. When reverse searing or grilling, this is the important tool to use when finishing over high heat to make sure the meat is pulled at precisely the right time when it is done.

Our Recommended Temperatures for Cooking a Steak 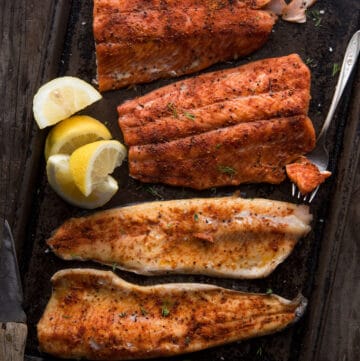