You are here: Home » Food » Wild Mushroom Soup with Sherry and Thyme 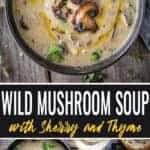 A hearty Wild Mushroom Soup is the ultimate comfort food in our house. This recipe calls for both dried wild mushrooms soaked in sherry, and cremini mushrooms for a delicious, savory, earthy soup.

This soup was also adapted from our very first cooking class we ever took, and in some ways launched our food and wine journey. Read more for our take on an amazing Wild Mushroom Soup with Sherry and Thyme.

Once upon a time after Sean and I first moved in together (circa 2003-ish), we were living in San Francisco and his birthday was coming up. Neither of us were very good cooks at the time, and we were also struggling to get by (I was a full time graduate student, and also worked full time directing an after school program, and taught classes part time at the university… we were pretty busy!). So I decided to buy sean a cooking class. Secretly I just wanted him to learn some skills so he could cook great meals for me after a long day. 😉

The class was called “Soups, Stocks, and Sauces” and was meant to teach the fundamentals of, well, liquids. He came back from the class empowered and excited to cook me a soup he learned how to cook in class. Needless to say, a simple wild mushroom soup was the first thing he learned how to cook with confidence. We’ve since changed it up, a lot, but the fundamentals of creating a soup from scratch remain the same.

It was truly the gift that keeps on giving! Teach a man to fish…. ok, let’s move on.

Living in the Northwest we also have a ton of access to wild mushrooms. There are seriously foragers all over the place and the farmers markets are full of them. We love using a combination of different mushrooms for flavor. Feel free to adapt the mushrooms to whatever you have in your area.

What Are Wild Mushrooms

Wild mushrooms are simply mushrooms not cultivated by humans (i.e not grown or farmed). They’re found in nature. In this soup we start with wild (dried) Chanterelles, Porcini, or sometimes Morels.

How to Store Mushrooms

How to Clean Mushrooms

The most important rule to mushrooms is to avoid them from getting wet. When cleaning the potential dirt from the mushroom the two easiest methods are a dry or slightly damp paper towel, or using a kitchen towel.

How to Make Wild Mushroom Soup

The steps to making a wild mushroom soup are important in order to avoid the texture of the soup becoming unpleasant. If you add the liquid first, the texture of the mushrooms will be soft and almost gelatinous. We generally follow this order:

We add a touch more flavor by adding a good quality Sherry (NOT “COOKING SHERRY”!). Sorry for yelling, but the key is to find a Sherry that you would actually sip yourself (if you wouldn’t drink it, don’t use it). To add the Sherry flavor we re-hydrate the dried mushrooms with the sherry and then pour into the soup as part of the liquid after they have re-hydrated.

We finish with a nice crusty bread. For an added bonus, dice up a few fresh chanterelle or cremini’s and fry up in butter as a nice topping.

This soup is slightly creamy from the crème fraîche mix, and very savory from the earthy mushrooms and sherry. The creamy textures and flavors are a fantastic match for a barrel fermented Chardonnay.

You can also try it with white Rhone blends too. We recently tasted this with an incredibly delicious blend of Chardonnay, Roussanne and Viognier from Kontos Cellars out of Walla Walla, Washington. The wine had the perfect balance of fruity richness, savoriness, and a touch of spice that was fantastic with the soup.

If you can’t find this small production wine, look for a new world Chardonnay or Rhone Style Blend from Washington State or California. If you prefer a red wine, you can’t go wrong with an Oregon Pinot Noir for this. 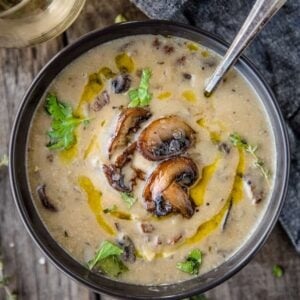 For the Wild Mushroom Soup

Optional: Take butter and saute more mushrooms for a fun topping. The fried mushrooms are a great finish. Cook the mushrooms at a medium-high heat to get a nice sear on the sliced mushrooms.  *This recipe was adapted from a cooking class taken at the Viking HomeChef Store and Cooking School in San Francisco around 2003.
Find the perfect wine pairing at the Vindulge Wine Shop

This website uses cookies to improve your experience while you navigate through the website. Out of these, the cookies that are categorized as necessary are stored on your browser as they are essential for the working of basic functionalities of the website. We also use third-party cookies that help us analyze and understand how you use this website. These cookies will be stored in your browser only with your consent. You also have the option to opt-out of these cookies. But opting out of some of these cookies may affect your browsing experience.
Necessary Always Enabled
Necessary cookies are absolutely essential for the website to function properly. These cookies ensure basic functionalities and security features of the website, anonymously.
Functional
Functional cookies help to perform certain functionalities like sharing the content of the website on social media platforms, collect feedbacks, and other third-party features.
Performance
Performance cookies are used to understand and analyze the key performance indexes of the website which helps in delivering a better user experience for the visitors.
Analytics
Analytical cookies are used to understand how visitors interact with the website. These cookies help provide information on metrics the number of visitors, bounce rate, traffic source, etc.
Advertisement
Advertisement cookies are used to provide visitors with relevant ads and marketing campaigns. These cookies track visitors across websites and collect information to provide customized ads.
Others
Other uncategorized cookies are those that are being analyzed and have not been classified into a category as yet.
SAVE & ACCEPT
3K Shares
Pin3K
Share49
Tweet