You are here: Home » Food » Cooking With Green Chile – From Fresh to Canned 

Cooking with Fresh Green Chile is a magical experience. Just ask anyone from New Mexico and you’ll hear a lot of opinions about how New Mexican Green Chile is so ingrained in the food and culture of the state. From a green chile sauce of simply roasted chile to the common green Chile stew made with fresh Hatch Valley chile, the varieties of green chile peppers create amazing meals.

For millennia the Green Chile was grown by the Pueblo people throughout the Southwest part of the United States. Pueblo Chiles are still cultivated to this day and showcase the diversity of the pepper. There is not one specific type of pepper that is the New Mexican Chile, instead it’s a variety of heirloom peppers.

The most common type of peppers are the Big Jim, No. 6, No. 9, Sandia, and New Mexico 6-4. The various plants were often bred to change heat levels to appeal to a variety of palates. New Mexico State University plays a big role in the ongoing research and development of chile peppers, and a great resource for research.

New Mexico even created legislation to be sure that any labeling of the chile properly identified it as a New Mexico chile versus those grown in Colorado or California.

In order for a pepper to be labeled Hatch it must be grown in the Hatch Valley of New Mexico around the town of Hatch, NM. Many chile experts point to the growing conditions in the Hatch Valley as perfect for the distinct flavor and heat profile of Hatch Green Chiles. The Rio Grand River combined with the soil type and weather all make it an ideal place for growing fresh chile.

Hatch peppers are similar in that they can be many different varieties.

Like New Mexico, chiles are also grown in Colorado and often referenced in the recipe for Chile Colorado.

Often the most common chiles found in California are the Anaheim and Poblano varieties.

Peppers are planted in the early spring (April) and are harvest season is in late August through December. Hatch Chile Season generally follows the same timeline. Frost, rain, and other environmental factors can speed up or slow down any growing season.

But you can generally expect to see “Hatch” or “New Mexico” fresh chile in mid August and for a few weeks there after. As October hits that’s when the red chile peppers tend to show up and are then dried for the ristras.

Like any fruit, the varietal of the pepper will define the actual flavor and level of heat as well as the level of ripeness. The color of the chile won’t really change the heat level. Green chiles are harvested early in the growing season and as it sits on the plant they start to turn red later in the growing season. So red chile is simply the green chile varietal that has ripened further.

Green and Red Chiles will have a range of heat level based on the Scoville Scale of heat units. The higher the Scoville heat units the hotter a pepper generally will be. You won’t know how hot an Anaheim green chile pepper is when buying fresh, but generally a larger pepper can be milder than a smaller pepper. If looking for specific New Mexico chile that is hotter buy the jarred or canned chile as they are labeled mild, medium, and hot. Or seek out hot peppers you know are spicy, like a jalapeño or habanero.

In our green chile recipes we will generally use fresh roasted chile during the late summer and jarred throughout the rest of the year. If we specify a canned green chile it’s most commonly the Hatch brand 4-ounce can of diced chiles.

Here are a few green and red chile recipes that we love to make. 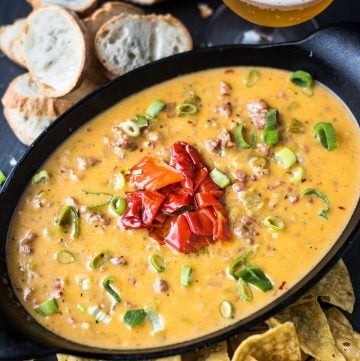 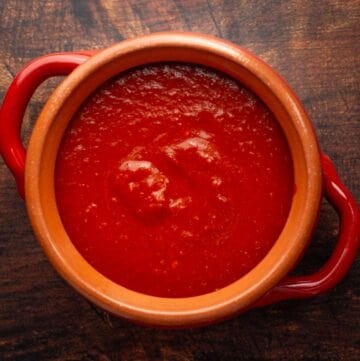 Authentic Red Chile Sauce Recipe (Enchilada Sauce)
An authentic dried chili based red sauce that is mixed in a blender and can be used as an easy enchilada sauce or enhanced for other recipe options.
Full Recipe 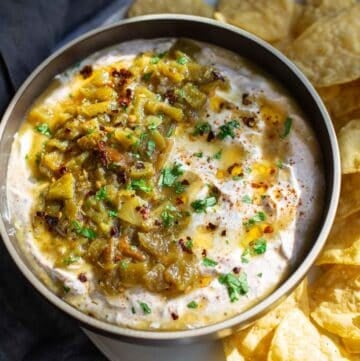