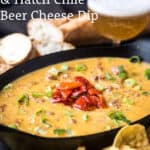 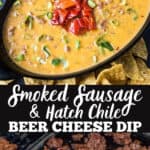 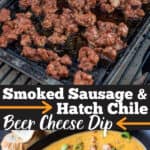 Smoked Sausage and Hatch Chile Beer Cheese Dip is the greatest thing to happen to cheesy beer-infused dips since cheddar.

My husband has a thing for cheese. He can’t resist buying a few fancy cheeses whenever he goes to the supermarket, and he’s a total sucker for a good melted beer sausage cheese dip. One of our favorite smoked cheese dips can be found at Deschutes Brewery (Portland, OR), made with creamy white cheese, Black Butte Porter, and stone ground mustard. It’s meant to accompany their equally indulgent soft house-made brewery pretzels. It’s also a place we default to when we have the kids because it’s centrally located (in the Pearl District) and it’s open and loud (drowning the sound of our excitable youngsters. Winner!).

While other restaurants try, very few can come close to their dip. So instead of trying to make a copycat version of theirs — and forget the pretzels (we’re far from bakers, plus our boys have gluten allergies… booo!) — we decided to stick our hands at making our own version of a beer sausage cheese dip. And duh, it would involve smoking everything.

Of course our dip will need some meat and a little something extra to give it that “hmmmm” factor. So we decided on a combination of smoked sausage, smoked Hatch chili peppers, beer (but of course), and a mix of different types of cheeses (about half being smoked cheddar).

Though you don’t have to smoke your own cheese, unless you’re feeling really rockstar-ish. Tillamook does a pretty good job at their smoked cheddar.

Also, if football is your thing, this is prime time for tailgating season!

Start with bulk hot Italian sausage, breaking it up and placing on a tray or sheet pan. Then smoke it at 250 degrees F for around one hour or until the internal temperature of the thickest chunks are at 165 degrees. We recommend using an instant read thermometer like the Thermoworks MK4, taking the temperature in the thickest pieces of sausage, inserting probe only halfway into the meat. This is also a great opportunity to get those kiddos involved 😉

At the same time you can smoke your chile peppers next to the sausage. Hatch chile peppers are in season, so we’ve been using those. But Poblanos work well too, as well as Anaheim. Hatch can be spicy so if you want less heat, go with a Poblano.

Fun fact: Did you know one fresh medium-sized green chile pod has as much Vitamin C as six oranges? So that means this dip is actually healthy for you! Uh… kinda 😉

After those little guys are smoked, chop up the chiles and break up the meat if it is still in larger chunks. Then start the dip.

Alternatively you can roast green chiles on the grill as well.

Grab a saucepan, sauté some onions, then add the smoked meat and chiles, some flour to thicken, the BEER, the cheeses, and finally mix away until your smoked cheese dip is nice and smooth. Transfer to a dish and serve with slices of bread or corn chips. Or if you’re cool and went all out, serve them with your homemade pretzels (show off!).

Pro Tip: If you’re serving this for a party or don’t intend to devour it within 5 minutes of cooking, transfer to a slow cooker and keep on low to keep the cheeses from hardening back up. Leaving it over a low heat will keep it creamy and indulgent.

For Extra Kick: If you want to add a little extra kick we recommend topping your smoked cheese dip with some pickled peppers. We’re a little obsessed with the spicy pickled peppers by the local company, Mama Lil’s. But you can experiment with any pickled spicy pepper to top your dip with. 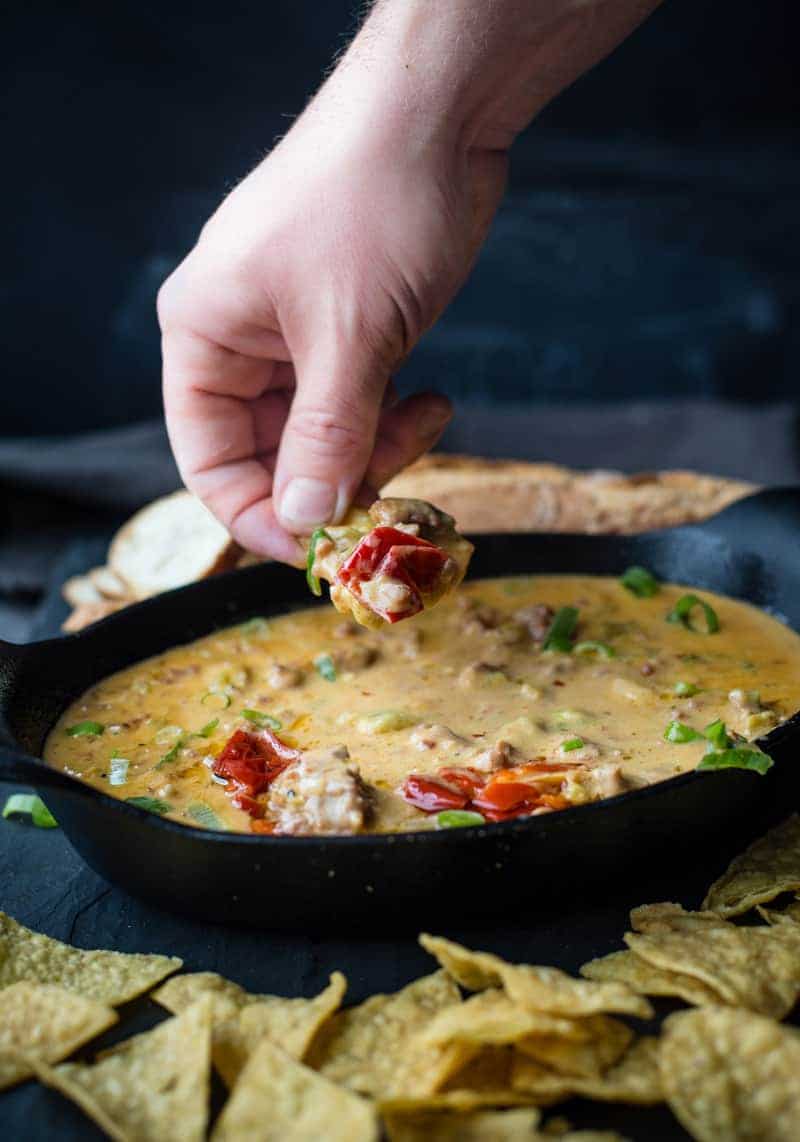 We like something light and fresh for this, so we like a Pilsner. Kölsch, amber, and wheat beers provide great flavor too. For something with a little extra kick try something hoppy, like an IPA.

What to Pair with Beer Sausage Cheese Dip

Since this dish was inspired by a brewery version, and we made it with beer, it would only be fair to pair the finished dip with a beer. Go ahead and use whatever beer you used for the dip. We generally prefer lighter beers for this. Anything like a stout or porter will add intense flavors taking away from the gorgeous smoke from the sausage and chili peppers.

The hubby’s fav is Kölsch by Occidental Brewing Co. It’s super refreshing and super crisp and is fantastic inside the dip as well as a palate cleanser in between bites.

Why yes, you absolutely can, and should, pair wine with this! We cooked this on AM Northwest recently and brought wine to pair. Since we’re talking football season and casual fare, we went with some of Oregon’s newest canned wines. Yeah, that’s right, canned wines, baby! You’ll find some fun and tasty options from Free Public and Canned Oregon  (brought to you by the folks who also produce Stoller Family Estate). You can see the full segment here!

*Disclaimer: this post contains affiliate links. We only recommend products we use and love!

*This post was originally published in September of 2015, updated in October 2018 with new information and photos. 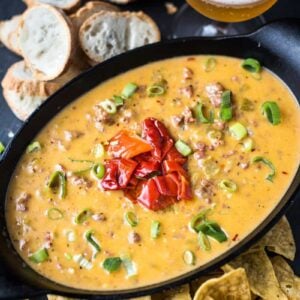 For the Smoked Sausage and Chillies:

For the Beer Cheese Dip:

To smoke the Sausage and Chilis:

To make the Beer Cheese Dip:

Optional Toppings:  We love topping with some chopped green onions and pickled peppers. Try pickled jalapeños or if you can find them, Mama Lil’s peppers.  Pro Tip: If you want a char and the skin off the peppers, just put under a high broiler and rotate every minute until blackened. It won’t have the smoky flavor, but will still be delicious.
Find the perfect wine pairing at the Vindulge Wine Shop

This website uses cookies to improve your experience while you navigate through the website. Out of these, the cookies that are categorized as necessary are stored on your browser as they are essential for the working of basic functionalities of the website. We also use third-party cookies that help us analyze and understand how you use this website. These cookies will be stored in your browser only with your consent. You also have the option to opt-out of these cookies. But opting out of some of these cookies may affect your browsing experience.
Necessary Always Enabled
Necessary cookies are absolutely essential for the website to function properly. These cookies ensure basic functionalities and security features of the website, anonymously.
Functional
Functional cookies help to perform certain functionalities like sharing the content of the website on social media platforms, collect feedbacks, and other third-party features.
Performance
Performance cookies are used to understand and analyze the key performance indexes of the website which helps in delivering a better user experience for the visitors.
Analytics
Analytical cookies are used to understand how visitors interact with the website. These cookies help provide information on metrics the number of visitors, bounce rate, traffic source, etc.
Advertisement
Advertisement cookies are used to provide visitors with relevant ads and marketing campaigns. These cookies track visitors across websites and collect information to provide customized ads.
Others
Other uncategorized cookies are those that are being analyzed and have not been classified into a category as yet.
SAVE & ACCEPT
12.4K shares