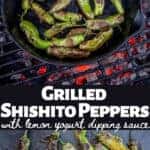 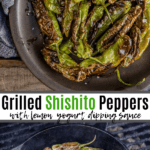 Summertime and peppers go hand in hand. Grilled Shishito Peppers are a great snack for a crowd. Blister over hot coals or a cast iron pan and add a cooling yogurt based dipping sauce and it’s the perfect appetizer bite.

Walking through most farmers markets in mid to late summer shows a bounty of peppers. We love grabbing a pint or two of shishito peppers as an easy snack to enjoy and cook outside. Grilling makes it easy to avoid turning on the oven.

Getting the peppers on the grill first allows us to stage the remaining grilled treats and makes the most use out of the charcoal being used. Add a little twist with grilled lemon.

What Are Shishito Peppers

Shishito peppers are a mild, small pepper similar to Padron often used in East Asian cuisine and come from the species Capsicum Annuum. Shishito peppers will have a wrinkly look versus padron peppers which are smoother.

Shishito peppers are mild by definition. On the Scoville scale they range from 50 – 200 and are milder than jalapeños. This makes for a perfect pepper for a crowd that may be sensitive to heat.

How To Grill or Blister Shishito Peppers

Grilling or blistering the Shishitos is easy. This method can also work for padron peppers.

A cooling dipping sauce is great, even if they are a mild pepper. Combine yogurt with some savory flavors to balance the dipping sauce with the peppers. We add a nice twist with mint and grilled lemon for extra flavor. 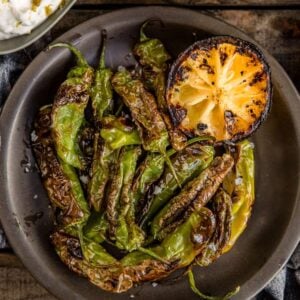 Add wood chunks to lump charcoal for extra smoke flavor. Padron peppers are a great alternative using the exact same method.
Find the perfect wine pairing at the Vindulge Wine Shop
Tried this recipe? We would love to see!Mention @vindulge or use the hashtag #vindulge

Here are some other fun summer recipes we love.

This website uses cookies to improve your experience while you navigate through the website. Out of these, the cookies that are categorized as necessary are stored on your browser as they are essential for the working of basic functionalities of the website. We also use third-party cookies that help us analyze and understand how you use this website. These cookies will be stored in your browser only with your consent. You also have the option to opt-out of these cookies. But opting out of some of these cookies may affect your browsing experience.
Necessary Always Enabled
Necessary cookies are absolutely essential for the website to function properly. These cookies ensure basic functionalities and security features of the website, anonymously.
Functional
Functional cookies help to perform certain functionalities like sharing the content of the website on social media platforms, collect feedbacks, and other third-party features.
Performance
Performance cookies are used to understand and analyze the key performance indexes of the website which helps in delivering a better user experience for the visitors.
Analytics
Analytical cookies are used to understand how visitors interact with the website. These cookies help provide information on metrics the number of visitors, bounce rate, traffic source, etc.
Advertisement
Advertisement cookies are used to provide visitors with relevant ads and marketing campaigns. These cookies track visitors across websites and collect information to provide customized ads.
Others
Other uncategorized cookies are those that are being analyzed and have not been classified into a category as yet.
SAVE & ACCEPT
310 shares