What could be better than a Cuban sandwich – you know, the pressed sandwich made with roasted pork, ham, Swiss cheese, pickles, mustard, served hot on Cuban bread — ??? 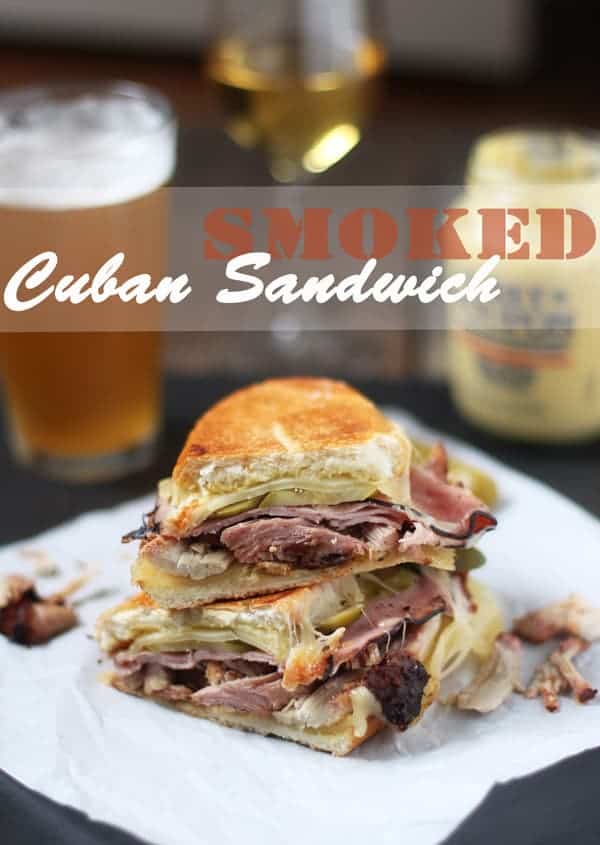 A Cuban sandwich made with smoked pork, that’s what.

Hubs has been on a Cuban sandwich kick since last fall, experimenting left and right with various pork recipes to use in the sandwich. For the actual Cuban sandwich, the recipe is quite simple, but what a really good Cubano (as they’re often called) comes down to is the quality of ingredients used, especially the pork. 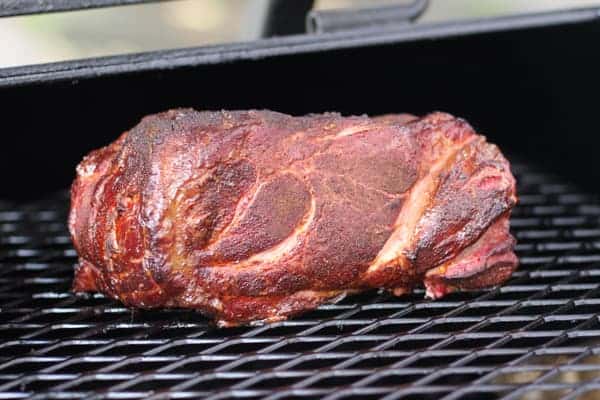 He first tried it the traditional way, with a marinade and roasted in the oven. The sandwiches came out great, but they weren’t authentically us (meaning they weren’t smoked).

Next time he smoked his pork butt the way he usually does (recipe here), but instead of pulling the pork, he sliced it into thick slices. The sandwiches were good, but I wasn’t feeling the thick cuts of pork. Maybe it was the texture? I wanted him to go back to our roots, meaning pulling the heck out of that delicious slow smoked pork. I find you get so much more flavor, moisture, and texture from pulling the meat vs. slicing.

Then he started marinating the meat in his Carolina inspired concoction, smoking the pork butt, and then pulling the meat.

So that’s the way we’ve been making them since. And I love them!

One thing we’ve discovered is that it’s all about the quality of ingredients! 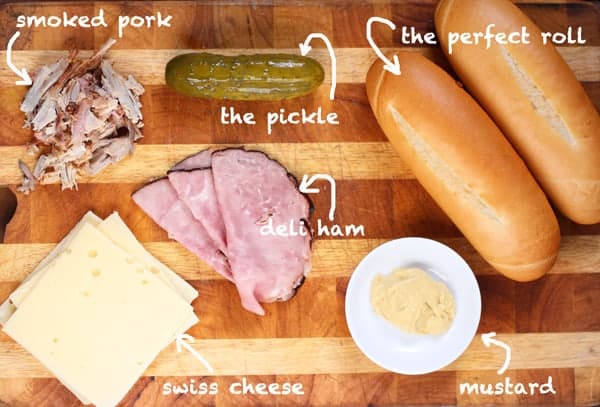 The Mustard. After going back and forth on Dijon vs. yellow mustard (the traditional mustard for a Cubano) I believe it truly comes down to your taste preferences. I’m a huge Dijon fan and love the spicy zing it brings to these sandwiches. But if you prefer the traditional taste of yellow, go for it. It’s your sandwich after all!

The next most important element, after the meat, is the pickles. Yes, the pickles! I can’t tell you how many jars of pickles we’ve gone through to find “the” one. We tried fancy artisan pickles, pickles from the farmers market, imported pickles. And you know what? My favorite pickles were the most generic of all. Cheap generic dill pickles you can find at every grocery store from the Atlantic to the Pacific. Weird, right? But again, find a pickle that makes you happy and you’ll be happy with your sammie. I have yet to be wowed by many of the artisan pickles out there. I’ve discovered it’s because they’re too sweet for my palate. If they’re soaked in apple cider vinegar, with loads of added sugar, that’s one sign they will be sweet. I like them more vinegary tasting. Like white vinegar tasting. The best pickles I had this past year were made by my neighbor, Becky. When I asked her what her secret was, she laughed and said she just uses plan ‘ol white vinegar. Hmm. Love em! 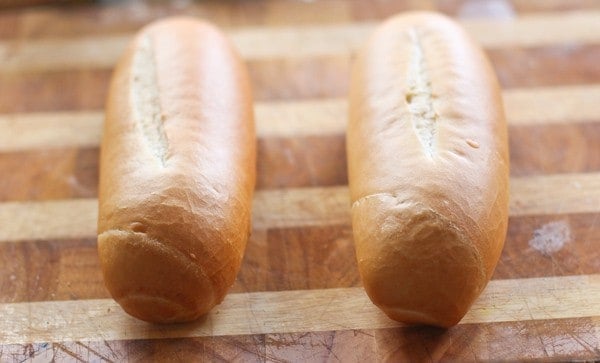 They are soft on the inside, but when coated with butter and cooked on the grill pan (or Panini press) they create the perfect crust crunch on the outside, soft and smooth on the inside. Yes please! 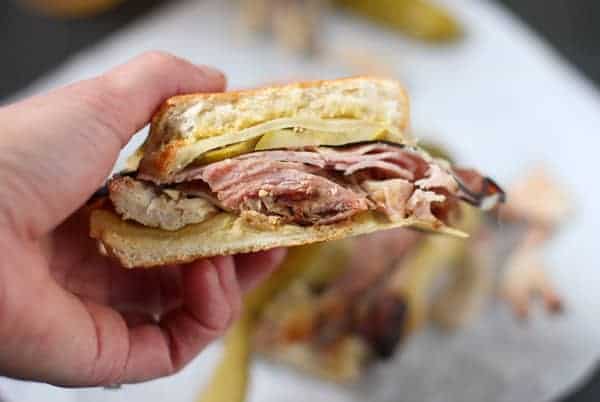 Bring all these elements together – the perfect tender smoked pulled pork, your favorite pickles, Dijon (or yellow) mustard, Swiss cheese, deli sliced ham, a little bit-a-butter, and the perfect bun – well, friends, you’ve got yourself a Smoked Cuban Sandwich. 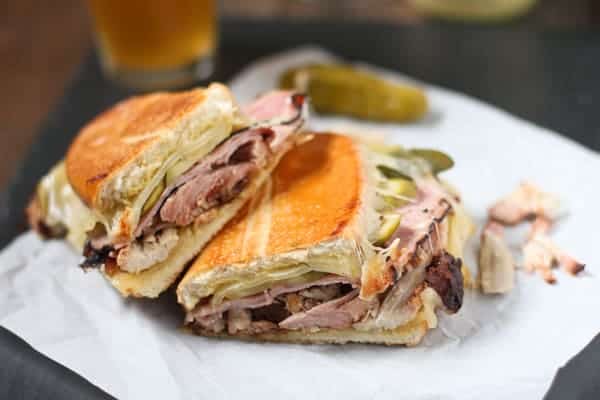 To Make The Smoked Pork

Smoking The Pork (use this Smoked Pork recipe)

A great way to add a new element to a traditional Cuban Sandwich. Using smoked pulled pork! This recipe is for one sandwich. Multiply ingredients for as many sandwiches you wish to make.
0 from 0 votes
Print Rate
Author: Mary Cressler | Vindulge

To assemble the sandwiches

This recipe is for one sandwich. Multiply ingredients for multiple sandwiches. **Cooking time may vary if you have a Panini press.
Tried this recipe? We would love to see!Mention @vindulge or use the hashtag #vindulge! 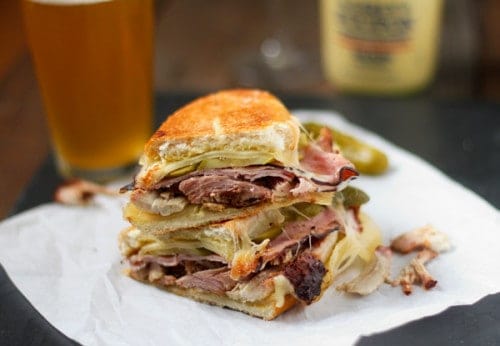 In Oregon, check out the 2012 vintage Pinot Noirs. You’ll find more richness and power to the fruit. You want something that won’t overpower the subtle smokiness and juiciness from the pulled pork mingled with the melted Swiss cheese and salty deli ham, but you do want something with enough fruit and good acidity to stand up to the various flavors from the sandwich. The natural acidity of most Oregon Pinot Noirs will be a fine match to the mustard and the pickles. Even though I’m partial to Oregon Pinot, I won’t tell if you chose something from CA. Just steer clear of the more earthy Pinots from the Burgundy region for this dish. Stick to the fruity New World style. And for Oregon, the 2012 vintage is the way to go for these sandwiches. 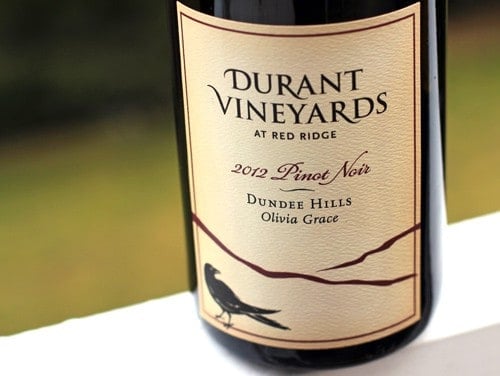 Reflective of the vintage, this pinot shows lots of delicious red berry fruit (cranberries, raspberries, cherry, and some rhubarb), along with some great baking spices that really meld well with the sandwich. The flavors are lush and balanced and the wine ends with a lingering umami savoriness that is a perfect match for juicy pulled pork. Now, this is not to downplay this wine saying you should pair it with a sandwich. It’s a gorgeous and lush wine that would be fantastic with roasted lamb or pork loin as well. But why not spoil yourself with a quality wine when you went through so much effort to make the perfect sandwich, amiright?!

Or for something a little more value priced…

We’ve been drinking tons of this wine over the last few months. Though their website says they’re out of the 2012 and onto the 2013 you should still be able to find some, at least locally. This is another that shows some rich red berry fruit, herbs, spice, and some wood characteristics (and even some cola notes). This was a great and versatile Pinot, and another that would stand well with these sandwiches.

Incidentally I also tasted these sandwiches with a most unlikely pairing, a Gewürztraminer. It was one of the wines I wrote about last week — Gundlach Bundschu Gewürztraminer 2013 (Sonoma Coast, California). You can see what I had to say about that wine over here. It had this nice spice characteristic, and lovely acidity that just really worked with the sandwiches!

Or for a casual afternoon pairing try a dry rosé. I’m a huge fan of rosé and pork. The berry fruit and acidity will be a great match for these sammies.

Or, if all else fails, stick with a beer!

For more recipes check out the Recipe Index.