I first knew of Craig Camp, of Cornerstone Cellars, several years ago through the Wine Bloggers Conference, but our paths never crossed.  I’m not sure why.  It wasn’t until, several years later, through the introduction by a mutual friend, Thea, that I was officially introduced to Craig and able to taste a few of the outstanding wines of Cornerstone.  This was last fall when Craig was visiting Oregon for the Wine Tourism Conference.  A few months later I had the chance to visit his tasting room while on a trip to Napa.  And I’m so glad I did.

During that visit last February I tasted the lineup of Cornerstones wines in their comfortable and unpretentious tasting room located in the heart of Yountville, in California’s Napa Valley.

Cornerstone Cellars was founded in 1991, but remained small and under the radar until 2007.  That’s when owner Mike Dragutsky partnered up with Craig Camp, and the two of them brought in Jeff Keene as their winemaker, to see where they could take Cornerstone.

They consider themselves an atypical winery.

“We do not make wine for everyone. We make what we believe in, not what the mass market demands. We will not be a slave to the fashion of the moment, we make wines we love to drink. What makes a great wine does not change; it’s not like having hemlines to go up and down according latest whim.”  – From their website

One thing that stands out to me, an Oregon gal, is that these Napa folks also make Oregon Pinot and Chardonnay.

Prior to meeting Craig, I knew he had lived and worked in Oregon’s wine country before moving to Napa, and that he also made Pinot Noir through Cornerstone.  But it never dawned on me, until that day, that the Pinot Noir they make at Cornerstone is actually from, and made in, Oregon.  They also have Tony Rynders, one of the Pacific Northwest’s most renowned winemakers, in charge of their Oregon program.

Craig explained that he makes Pinot Noir in Oregon because he firmly believes it’s the better place to grow it, rather than California.

“We make pinot and chardonnay in Oregon because we think it is a world class place to grow those varieties that the Napa Valley is not. It’s more important where the vines put down roots than where the winemakers do.”  –From their website

That’s a strong statement to say living in CA, a state that also produces TONS of Pinot.  I love the honesty!  And I wholeheartedly agree about Pinot in Oregon (though I have met some winemakers in CA recently who are slowly changing my mind about CA Pinot).  By the way, the Cornerstones Pinots are stellar.

But I’m not here to talk about his Pinot Noirs. Nor his Cabernet Sauvignons, Napa’s flagship wine. 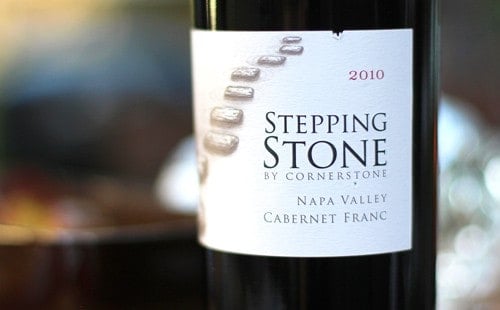 Cabernet Franc is a grape I have a strange relationship with.  I usually love it in blends. Most commonly Cab Franc is blended with Cabernet Sauvignon and Merlot, along with Malbec and Petit Verdot, to produce Bordeaux-style blends, adding perfume, pepper, herbal notes, tobacco, sometimes some green pepper notes, and sometimes violets to the wine. I rarely enjoy it on its own (with the exception of the Loire Valley of France, in particular the sub-region of Chinon).  This is just a taste preference for me.

So when Craig pulled out his 2010 Cabernet Franc when I visited the tasting room last spring, I was admittedly a bit skeptical.  But at first sniff I knew this one was different.

I was initially blown away by an intriguing minty-herbal note that hit me immediately.  It was like mint meets green fruit with some rich cherry, tobacco, and spice.  It also had this lovely savoriness to it.  Craig described it as having “a natural MSG.”  I love that analogy.  So true.  Wines that are savory immediately make me crave food. Incidentally, they usually tend to be well suited with food.  Craig also said his favorite pairing for this wine was lamb, so I promised him once I finally opened the bottle I purchased that afternoon, it would be with not just any lamb, but smoked lamb.   I followed through with my promise last weekend.

Hubby went out in search of the perfect lamb chops, but fell short.  Our favorite butcher had nothing good that afternoon, so he opted for a leg of lamb instead. 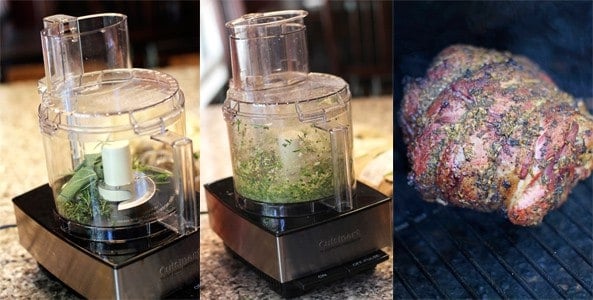 He started with an herb paste (sage, thyme, rosemary, garlic, olive oil) and rubbed the lamb, smoked it for a couple of hours and served it alongside some roasted potatoes. 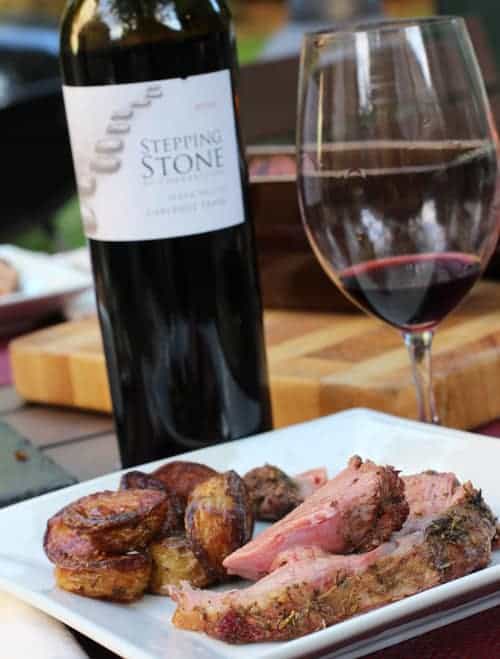 Nearly a half a year later I finally opened the wine I purchased from the tasting room.  This time the wine presented more of a gamey aroma than the savory, though both slightly similar.  It seemed darker, richer, with deep black cherry aromas, spice, tobacco, deep, yet well integrated, oak tones.  This wine was very well-structured.  The herbal and gamey notes were so well suited for the herb-coated lamb, and the mild smoke infusion was so intriguing with the oak and dark cherry on the wine.  The wine and lamb played off each other until the final bite.  And yes, I couldn’t stop taking small bites, then taking another sip of the wine, repeat, even when I knew I was full. That’s the result of an excellent pairing … you just can’t stop! 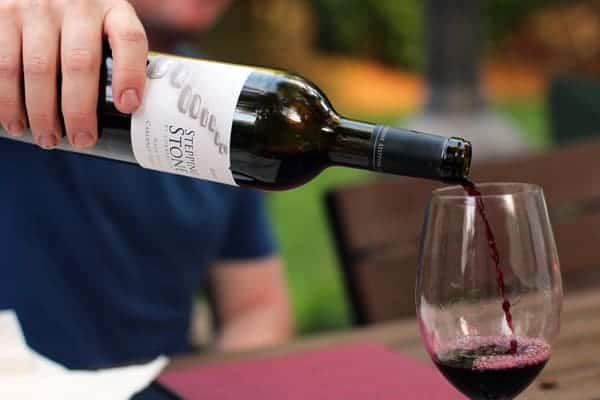 I’m so glad, after all these years, that I finally met Craig and able to experience his wines, especially this lovely Cabernet Franc, and I look forward to returning to the tasting room to see what new things he has going on.

Note that as of the 2011 vintage the Stepping Stone Label changed to black (like the photo below).  I really like this change. Sharp! 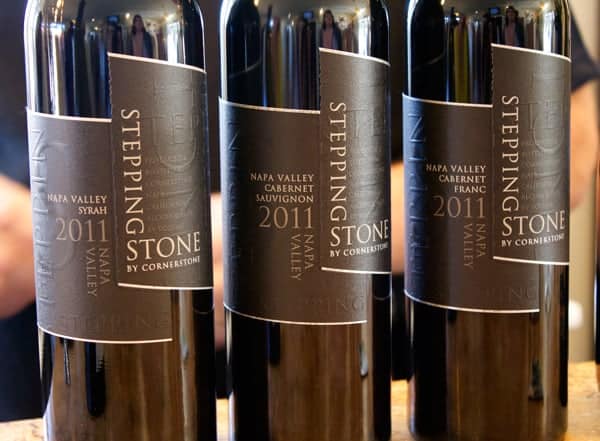 And if you should ever find yourself in the town if Yountville, make sure to stop in and taste for yourself.   I’d love to know your thoughts.

I purchased the 2010 Cabernet Franc directly from the tasting room.  For more information on the current vintage of the wine, check out their website.