You are here: Home » Food and Drink » Grenache Wine Guide 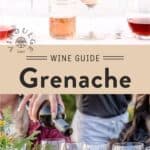 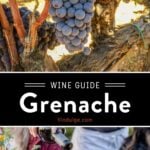 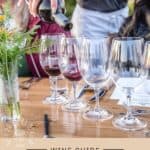 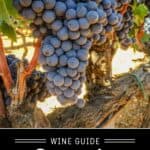 A grape that thrives in warm, dry conditions, Grenache plays a major role in wine production in southern Europe, particularly in Spain (where it is known as Garnacha), the south of France, and some regions of Italy. Great on its own, but also as a blending grape where it is responsible for some of the world’s most renowned red wines, this is one exciting grape to know. Learn more about this incredibly versatile and fascinating grape!

The red version of this grape, Grenache noir, is the more well-known, but Grenache blanc (a white grape that’s related to Grenache noir) is regularly used in blended wines throughout France’s Rhȏne Valley. The juicy fruit flavors, zingy acidity, and gentle spicy notes of Grenache wines have led to its expansion into New World wine regions like California and Australia, and its crowd pleasing qualities make it a smash hit wherever it goes (and grows).

Red Grenache: These wines are characterized by prominent red fruit flavors. Strawberry, cherry, and plum all count among the most common flavors detected, especially those made in Spain, the United States, and Australia. French and Italian wines also feature fruit flavors, but they’re counterbalanced with duskier flavors like leather and tobacco, along with an undercurrent of herbs and peppery spice.

White Grenache: These grapes tend to produce white wines with a fuller body than many other white varietals. Like red Grenache, white versions lean heavily on their fruit flavors; you’ll detect pear, green apple, white peach, and mango, along with a bright, citrus-like quality. In terms of aromatics, floral notes are commonly detected in white Grenache, making for an intense but refreshing drinking experience.

Rosé: The Cȏtes du Provence rosés that famously utilize Grenache are beloved for their light body (and light pink hue), their delicate fruit flavors, and their sprightly acidity. These rosés serve as ideal sippers for warm-weather picnics and pool parties, but they also pair nicely with seafood and other light fare all year long.

Grenache- or Garnacha, as it’s known in Spain- is believed to have originated in eastern Spain during ancient times, where it thrived (and continues to thrive) thanks to that area’s hot and dry climate. After migrating to other parts of Spain, the grape made its way over to other nations bordering the Mediterranean, like southern France, southern Italy, Greece, and island nations like Croatia. The grape started to migrate to the New World in the 18th century, and it most notably landed in southern Australia and in California.

Notable Regions Where Grenache Is Grown

Red Grenache: Red Grenache’s medium body, dry finish, and bold fruit and spice flavors give it the flexibility to pair with a wide range of foods. If you’re drinking the slightly-leaner French version (or a French-style Grenache made in the U.S.), dishes that feature braised and stewed meats (like the French classics coq au vin and cassoulet) are natural partners for these wines. When it comes to Spanish Garnacha, a lighter-bodied Garnacha works beautifully with grilled poultry and oily fish like salmon, while a full-bodied Garnacha is delicious with BBQ favorites like smoked pork ribs.

White Grenache: Because white Grenache is fuller-bodied than many other white wines, it can pair with dishes that might be considered too “heavy” for your typical bottle of white. It matches up well with cream sauces and cheese platters, but it’s also perfect with grilled fish, with spicy marinades, and even with heartier meats like lamb and pork.

Rosé: Grenache rosés, particularly those made in Provence, are meant for seafood. Pair a Cȏtes du Provence rosé with oysters, grilled white fish, or shrimp, and you’ll be a happy diner. However, these rosés are commonly considered “party wines” for good reason; they’re flexible and adaptable and will pair pleasantly with a wide range of dishes and appetizers (so don’t hesitate to bring a bottle to your next potluck).

Recipes to pair with Grenache

This website uses cookies to improve your experience while you navigate through the website. Out of these, the cookies that are categorized as necessary are stored on your browser as they are essential for the working of basic functionalities of the website. We also use third-party cookies that help us analyze and understand how you use this website. These cookies will be stored in your browser only with your consent. You also have the option to opt-out of these cookies. But opting out of some of these cookies may affect your browsing experience.
Necessary Always Enabled
Necessary cookies are absolutely essential for the website to function properly. These cookies ensure basic functionalities and security features of the website, anonymously.
Functional
Functional cookies help to perform certain functionalities like sharing the content of the website on social media platforms, collect feedbacks, and other third-party features.
Performance
Performance cookies are used to understand and analyze the key performance indexes of the website which helps in delivering a better user experience for the visitors.
Analytics
Analytical cookies are used to understand how visitors interact with the website. These cookies help provide information on metrics the number of visitors, bounce rate, traffic source, etc.
Advertisement
Advertisement cookies are used to provide visitors with relevant ads and marketing campaigns. These cookies track visitors across websites and collect information to provide customized ads.
Others
Other uncategorized cookies are those that are being analyzed and have not been classified into a category as yet.
SAVE & ACCEPT
13 shares