You are here: Home » Wine » Bubbles » A Story About Finger Lakes Wines

It is rare that a non-fiction book makes me cry.  And I don’t recall ever being moved to tears while reading a book about wine.  That is until last week when I read Summer in a Glass: The Coming of Age of Winemaking in the Finger Lakes, by Evan Dawson. 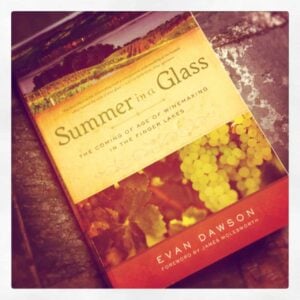 To say it is simply a book about the Finger Lakes Wine Region, in upstate New York, would be doing it a bit of a disservice.  This is not your average wine book full of technical jargon and facts.  Instead, this book, which reads like a page turning novel, takes you behind the scenes with 12 of the regions best producers, growers, and winemakers.  It is a collection of their personal stories and journeys, connecting you to their wines and the region better than any summary you are likely to find in a wine reference book or review in a magazine or newspaper.

Plus, you needn’t be specifically interested in Finger Lakes wines to enjoy this book, though it certainly helps.  The stories Dawson shares echo those from many emerging wine regions.  Stories of passion, hard work, emotions, friendships, triumph, and heartbreak.  Some of Dawson’s stories even remind me of the Columbia Gorge Winegrowing Region (I once worked as a general manager for a winery there), where I experienced first hand the camaraderie that develops between winemakers, growers, producers, and the greater community involved, and how they come together (and sometimes clash) to promote a region.  The people who travel from all over the world in order to grow grapes and make wine at a specific place or site, and those who help each other out by sharing equipment, advice, and even trade secrets.

Summer in a Glass not only educated me on the region, but inspired and moved me (yes, even to tears, especially in its final chapters).  If you are like me you will find excuses to keep reading until the very last page (even when it’s way past your bedtime).

Having family in the region, I’ve visited wineries in the Finger Lakes a half a dozen times but have never felt quite connected to any particular producer, nor have I felt like I truly understood the story of the Finger Lakes (where it’s been, where it’s going).  This book helped bridge that gap and helped me to better understand it and the passionate people behind so many of the wines I’ve previously enjoyed.  I finally started to get it.

In addition, the timing of reading this book came the same week I was asked to participate in a twitter tasting of Finger Lakes wines.  Incidentally the Finger Lakes Wine Alliance, who sponsored the tasting, produces some very nice twitter tastings; featuring a live broadcast with a panel of selected winemakers, allowing participants to engage with them while tasting their wines.  This live format is an excellent way to learn about the region, the wines, and the people behind them from the comfort of your home, as opposed to many other twitter tastings I have participated in where little information, education, or engagement is involved, let alone opportunities to engage with the actual producers.  After reading Dawson’s book I was excited to participate in this tasting in order to learn more from some of the winemakers he featured, while putting a face to some of the stories.

This tasting focused on the 2011 Riesling vintage, with eight different examples of Rieslings from the region.  It was a general consensus among the winemakers that 2011 was a challenging year with excessive rain during the ripening period.  A vintage that “people were giving the death before even harvesting,” as described by Derek Wilber, winemaker at Swedish Hill Winery.  The type of vintage that separates the great winemakers from the others, or what many in the industry refer to as a “winemakers year”, as explained by Jeff Houck of Lucas Vineyards.  “Twenty years ago it would have been considered a disaster,” Houck goes on to say, “but now, with progress, we were able to bring in clean fruit, and get beyond our challenges.”

What I found in most of the wines was clean, crisp, juicy fruit, and lively acidity — proving that great wine can still be made even in the most challenging years provided the right winemaker and the right grapes. 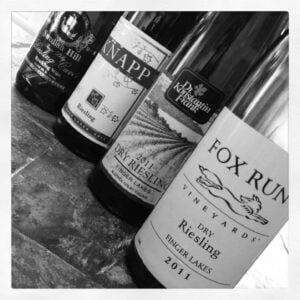 My general preference for Riesling leans towards the drier styles — like Fox Run Vineyard’s Dry Riesling, with bright citrus flavors up front and stone fruit on the palate with very crisp acidity and minerality.  Similarly, the Dr. Konstantin Frank Dry Riesling also started with citrus and tropical fruits, but had a noted salty/savory character to it which made it mouthwatering.  The wine remained crisp, slightly tart, and delightfully savory until the last drop.

And though I tend to lean towards the dry styles I still enjoyed the sweeter examples like Knapp’s Riesling.  At 3.4% residual sugar this wine had the acid to balance it out creating a very aromatic wine on the nose and a refreshing sweetness and juicy fruit on the palate that was by no means overpowering.  This bottle made me sad that summer was over, because it would be a great patio sipper on a warm day.

Another wine on the sweeter style that took me by surprise was Swedish Hill Winery’s Riesling Cuvée, Sparkling Wine.  With crisp sweet apples dominating the palate this wine is perfect for the fall season, reminding me of all the apple picking I’ve been doing with my kids lately and the resulting scents of apple crisps baking in the oven later in the afternoon.  Also at 3.4% residual sugar these bubbles had just enough acidity and crispness to keep it balanced.

The combination of this tasting combined with the timing of reading Dawson’s book made me increasingly excited about the wines coming out of the Finger Lakes.  It also made me thirsty for more Riesling.  In fact, I’m already plotting my next trip to see my in-laws so I can sneak out and go wine tasting while my mother-in-law happily babysits the twins. Anybody want to join me?

I purchased Summer in a Glass from Amazon for $10.17
The wines were provided by the Finger Lakes Wine Alliance.


« Looking back at 31 days on the road
Gundlach Bundschu… they’ve still got it! »