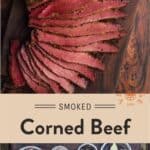 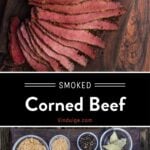 Smoked Corned Beef is a delicious meal with aromatics of spices and herbs and the rich and salty brine giving it that signature red color. Making your own corning spices is pretty easy, it just takes time, some special curing salt, and an understanding of how the curing salt process works. Smoking the brisket when it’s all done adds to the rich flavor.

This post is sponsored by Beef. It’s What’s For Dinner on behalf of the Beef Checkoff, all opinions are our own. And our opinion is that this recipe is an awesome way to learn about curing resulting in incredible Corned Beef.

What is Corned Beef

Corned Beef is a salt cured beef cut that has soaked in a wet curing brine (versus dry brine for salami) for several days. The distinctive red color comes from a specific ingredient, Prague powder 1, and the mix of salt, herbs, and spices giving a distinctive aromatic and salty flavor.

While the root word evolved from German, referencing “small seeds” (like those used in corning spices), the English made corning more popular as a phrase referencing large rock salts used for curing. The Irish then continued with the popularity as English influence in Irish cuisine evolved. Irish immigrants brought the dish to America where it’s traditionally enjoyed boiled with cabbage, corning spices, and vegetables.

Our dish is smoked versus boiled for a distinct flavor. We also have an article about a Corned Beef Round if you are looking for ideas on other cuts.

Technically any beef cut can be used to corn, but certain cuts lend themselves to having enough intramuscular fat and thickness for good flavor and texture. The most popular is beef Brisket Flat-Half. A Beef Round Roast is another cut you will find corned.

For this recipe we use a 5-pound Brisket Flat that we have cut up from an entire full beef Brisket. Many butchers will have Brisket Flats already cut up. We recommend you call ahead to see if they have pre-cut Briskets available. Target 5 pounds based on the ratio for the wet brine that we are recommending in this recipe.

In the example we have below, we started with a large full Brisket, also called a packer trim Brisket, (because that was what was available to us) and trimmed it down to the 5-pound Flat-Half, which we are using for our Corned Beef.

One thing to note when deciding what cut you want to use is how much time you have to brine. The thicker the cuts (like those from the round or sirloin), the longer it takes for the brine to work its way through the interior of the meat. So, you either have to give it more time to work its way through the meat or consider injecting the meat with the brining solution in addition to soaking it.

Brining is a form of a “wet cure” used to add flavor and preserve foods. Brine is a salt-based liquid that you immerse meat into for additional flavor. Osmosis kicks in and the salt from the brine infuses with the cells of the meat to add flavor and moisture.

Adding sodium nitrite in the form of Prague Powder 1 (a mix of salt and sodium nitrite) also helps give a distinctive color to the Corned Beef. You will see that the salt will be a bright pink color. The color is meant to stand out, so you do not use this salt as table salt. It’s only meant for curing (not as an everyday table salt). The pink color on its own does not add any flavors.

As the meat sits in the wet brine, the nitrites help the curing beef retain a red color even when cooked all the way through, versus an ashen grey that can result from simply salting. The level of nitrites also inhibits the growth of food spoiling bacteria. So, in the case of Smoked Corned Beef, you see the distinctive red color from the resulting meats reaction to the nitrite.

We’re using a combination of sugar, salt, herbs, and spices to provide a balanced yet very aromatic flavor.

If you planned to make traditional Corned Beef and cabbage, you would reserve 2 tablespoons of the Corned Beef spices to flavor the water boil.

As we mentioned, Curing Corned Beef just takes time. It is not overly complicated. And once you have selected your cut you can determine about how much time it will take to make.

*As mentioned, you can inject the meat with the same brine solution and soak the meat to speed up the curing process. Injecting the meat can allow the cure to set in as little as 5 days. If you have a thick cut, or you don’t have a full 7 days to brine, inject the meat in 1-inch cubes using the brine to help incorporate the cure faster.

*Start checking the temperature of the Brisket when the internal temperature starts reaching 190 degrees. All Briskets cook a little differently, so you should always cook to temperature and not time. Probe the Brisket Flat Half in multiple places to make sure it’s the desired temperature.

Side Dishes for Smoked Corned Beef

While we grew up with boiled potatoes and cabbage, these sides bring the traditional element but on the grill. 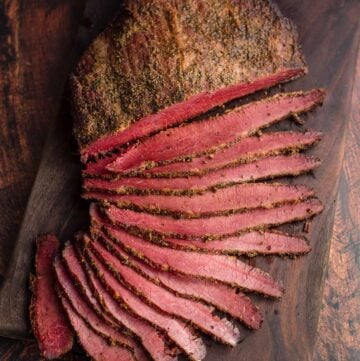 How to Smoke Corned Beef

Note on Brining Time – Injecting the brine into the meat can help speed up the brining process to as little as 5 days. Use a food safe injector to inject meat throughout. And then place into the brining solution. Curing – Be sure to use the right ratio of Prague Powder 1 based on weight and volume of meat and liquid.  Warning About Seasoning – The cure will add a good salt base to the meat. Add your favorite beef rub, but if you have any aversion to salt, then pull back on salt in the seasoning. This is really important to avoid an overly salted flavor. Taste your Beef rub prior to using and adjust as needed to minimize the salt.
Find the perfect wine pairing at the Vindulge Wine Shop

This website uses cookies to improve your experience while you navigate through the website. Out of these, the cookies that are categorized as necessary are stored on your browser as they are essential for the working of basic functionalities of the website. We also use third-party cookies that help us analyze and understand how you use this website. These cookies will be stored in your browser only with your consent. You also have the option to opt-out of these cookies. But opting out of some of these cookies may affect your browsing experience.
Necessary Always Enabled
Necessary cookies are absolutely essential for the website to function properly. These cookies ensure basic functionalities and security features of the website, anonymously.
Functional
Functional cookies help to perform certain functionalities like sharing the content of the website on social media platforms, collect feedbacks, and other third-party features.
Performance
Performance cookies are used to understand and analyze the key performance indexes of the website which helps in delivering a better user experience for the visitors.
Analytics
Analytical cookies are used to understand how visitors interact with the website. These cookies help provide information on metrics the number of visitors, bounce rate, traffic source, etc.
Advertisement
Advertisement cookies are used to provide visitors with relevant ads and marketing campaigns. These cookies track visitors across websites and collect information to provide customized ads.
Others
Other uncategorized cookies are those that are being analyzed and have not been classified into a category as yet.
SAVE & ACCEPT
296 shares