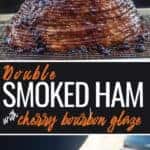 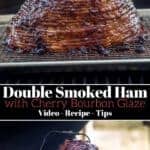 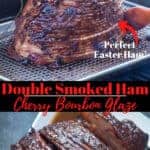 Smoking a store bought cured ham gives the ham what’s called a double smoke, or twice smoke. This Cherry Bourbon Glaze takes a Smoked Ham to the next level giving it that extra wow factor!

Find out how to double smoke your next holiday ham.

I wasn’t much of a ham person growing up. We had one every year for Easter and often Christmas, but it just wasn’t my thing. It always ended up dry and boring when cooked in the oven. But cooking it in the smoker gives it so much added flavor, and when you ditch the packaged glaze that comes with your store-bought ham and replace it with your own it’s off the charts! I’m more than happy to reintroduce ham back into my holiday lineup with this double smoked ham!

When learning how to cook a smoked ham, I think it helps to start with what type of ham this works best on. The ham comes from the rear portion of the pig versus the pork shoulder. If you simply buy a ham and smoke it, you will get a very similar characteristic to a shoulder. In this post, we are referring to the same cut, but one that has been wet cured. This is what you are likely to get when you buy a ham at the store or butcher. One that is already cured and pre-cooked

We like to buy a ham that is wet brined and already spiral sliced. The slices will allow glaze and rub to get into the meat and makes for an easy cut when done. In addition to the wet brining, what you will see in the store is often smoked once and precooked. So by smoking to reheat a second time, we get the twice smoked ham component we want for flavor.

We’re adding big flavors to our ham so we start by adding Dijon mustard to provide something for the rub to stick to. We then coat with a dry rub to give it some bark as we smoke it. This will also add great outside flavors and a slight crunch.

Finally we will finish with our sweet and savory cherry bourbon glaze which will slightly caramelize and give that nice added flavor to the finished ham.

How to Cook a Smoked Ham on the Smoker

We use fruit wood and smoke at a temperature between 225 and 250 degrees Fahrenheit. After coating the ham with your Dijon and dry rub, you can place the ham on a tray, like in the photos, or directly on your grill grates. For ease of transferring we like to use a sheet tray.

Once you remove the ham from the smoker immediately apply one more coating of the glaze and let it set. Serve warm. 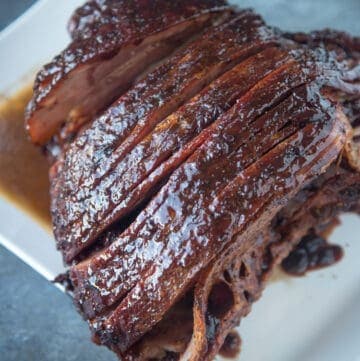 We use our Ultimate Dry Rub for this recipe.
Tried this recipe? We would love to see!Mention @vindulge or use the hashtag #vindulge!

Most folks are usually enjoying a ham for a holiday meal with family and friends. There’s likely going to be a lot of different flavors in the mix, much like Thanksgiving, so we don’t need to freak out about something perfect for just the ham.

But when focusing just on the ham, we’ve got a lot of flavors going on here: smoky, sweet, savory. The meat itself is salty and sweet, and the glaze is bold. We’re looking to wines to stand up to this. One of my go-to wines for smoked ham is a bolder style Rosé. It truly fits the bill for all categories. But if you’re looking for something else, consider the following:

White wines can be great with ham, but a bit trickier with this glaze and dry rub. But those that fit the bill include a dry-ish Riesling or Chenin Blanc.

For reds shoot for something fruity like Beaujolais or new world Pinot Noir. With the bold flavors of the glaze you can even reach for a Zinfandel. It would be great with this!