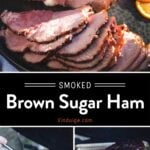 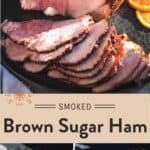 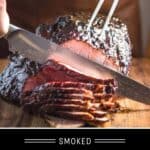 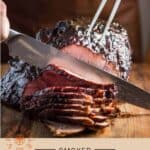 Smoked Ham is the perfect meal for any holiday, like Christmas or Easter dinner, or even to have on hand for sandwiches. This brown sugar glaze is absolutely incredible over the top of your smoked ham recipe.

Smoking precooked ham is truly easy and a simple honey glaze is a great way to add incredible flavor. This is hands down the best ham recipe I’ve ever had, and I hope you and the people you cook it for feel the same way!

The ham comes from the rear leg of pork, or pork shank, versus the pork shoulder or pork butt. A ham is leaner than the shoulder and is most often cured before purchase. This recipe is focused on precooked ham that has been cured and cooked (or smoked) versus a fresh ham (uncured raw ham).

At the grocery store this type of ham may be labeled as the following:

Our favorite style of ham is the whole bone-in ham from Snake River Farms. You can read more about the style of ham and Kurobuta pork here. The flavor profile is tender, refined, and has a pronounced pork or bacon like flavor that needs no additional seasoning other than a finishing glaze.

How to Smoke a Ham

Smoking a pre-cooked ham is really about heating up the ham to an internal temperature of 140 degrees Fahrenheit (F) and then adding any additional flavor. There is no need for a brine or other preparation.

When smoking a ham keep the temperature at low heat, between 225 and 250 degrees F, to retain the moisture of the ham.

How to Smoke on a Traeger or Pellet Grill?

For any pellet grill, follow the same steps above versus using the smoke setting. The range for smoke is 160 – 180 degrees F, and will dramatically increase the smoke time with minimal additional smoke flavor.

Also consider adding a water pan to maintain humidity in the cooking chamber.

How to Smoke Ham on a Charcoal Grill?

If using a Kettle grill, start with an indirect heat setup. Use wood chips placed on the charcoal and keep the vents mostly closed to keep the airflow to a minimum.

Then place the ham over the indirect side and follow the same instructions.

How to Smoke on a Big Green Egg or Kamado Grill?

Follow the same steps as outlined above. Because of how efficient a Big Green Egg is, no water pan is needed. Keep the daisy wheel and the bottom vent almost completely closed after warm up to keep the temperature at 225 – 250 degrees F.

How to Smoke on a Yoder or Offset Smoker?

Follow the same steps as outlined above. When preheating smoker start with lump charcoal and then cook using just wood chunks or split logs. The embers from the wood will maintain the heat while the wood adds the flavor.

We recommend a water pan in an offset smoker with the vents fully open for airflow.

How Long to Smoke a Ham

To probe around the ham, the other recommended tool is the Thermoworks Thermapen. This instant read thermometer is a great tool to make sure all of the ham has reached the safe internal temperature, versus just one portion the Smoke unit monitors.

How to Make Brown Sugar Glaze

Some variation of a brown sugar glaze for ham is a perfect pairing for this holiday meal. This is also why we don’t season the ham with a rub. You don’t need to with this ultra flavorful glaze!

In a medium size saucepan over medium heat add butter and let melt. Add shallots and sauté to soften but not caramelize (about 6 – 8 minutes). Then add garlic and sauté for additional 1 minute just to soften.

Finally add sugar, cider, honey, Dijon, cayenne, and salt to pan, slightly increase heat and bring to a simmer. Allow glaze to simmer for up to 10 minutes, taking care to not boil. The glaze will thicken as the sugar and liquids incorporate and slightly reduce.

Want something different for your glaze? Try our Double Smoked Ham with Cherry Bourbon Glaze.

If you have leftover ham this recipe makes for the best smoked ham sandwiches or with our smoked Cuban sandwich. Or, if you want the ultimate breakfast, try our Smoked Ham Hash.

This ham has a slightly smoky and savory flavor, juicy and tender meat, with a sweet caramelized glaze. Because of this profile, there’s a wide range to choose from for your holiday dinner.

If you’re craving white wine you can’t go wrong with Riesling. It’s almost meant for a ham dinner! Alternatively, Rosé and Pinot Gris (Grigio) work nicely too with their bright fruity flavors. A bold Chardonnay, from California for example, can be really interesting with the caramelized brown sugar honey notes from that glaze.

For red wine Pinot Noir is one of my favorites, followed by Gamay (think Beaujolais), or for something a little more bold and fruity try a Zinfandel.

How much ham per person?

Plan on ¾ pound of pre-smoke weight ham per person. With sides, this is a couple of slices per person.

How do you keep a smoked ham from drying out?

Avoid overcooking the ham. To best do this be sure when cooking the smoked ham you are using a leave-in meat thermometer.

Do I need to soak a smoked ham?

No. Even if a ham is pre-brined there is no need to soak it first to remove the salt. And because it’s pre-cooked you just need to heat it up.

How long to smoke a 5 pound ham?

A 5-pound ham will generally take a little over 90 minutes or 20 minutes per pound.

Following the 20 minutes per pound rule a 10 pound ham will take 200 minutes or a little over 3 hours 20 minutes.

What if my smoked ham is done early?

If your smoked ham reaches the ideal temperature earlier than you want – then remove the ham from the smoker and wrap in aluminum foil. Make the glaze and then glaze the ham just before serving so it doesn’t stick to the foil.

Side Dishes for Holiday Ham

Tried this recipe? Give us a start rating and we would love to see! Mention @vindulge or use the hashtag #vindulge on all the social media handles. And consider subscribing to our newsletter where we drop all our favorite ideas and inspirations every week.

This recipe was originally published in December of 2019, and updated in October of 2022 with an updated FAQ. The original recipe remains the same.

This post contains affiliate links, which means if you click on those links we may receive a small commission. We only partner with products we know and love, and it helps keep the blog going! 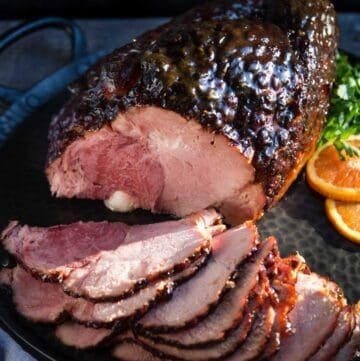 How to Smoke Ham

For the Brown Sugar Honey Glaze

Note About the Glaze: If the glaze gets too thick, then simply add 1 tablespoon of warm water at a time to glaze and stir to desired consistency. F If the Smoked Ham is done early: Wrap in parchment paper or foil and store in a cooler with no ice. This will keep the ham warm for up to four hours if not opened. Glaze the second time when you are about to serve. Otherwise the glaze will stick to the parchment paper or foil.
Find the perfect wine pairing at the Vindulge Wine Shop

This website uses cookies to improve your experience while you navigate through the website. Out of these, the cookies that are categorized as necessary are stored on your browser as they are essential for the working of basic functionalities of the website. We also use third-party cookies that help us analyze and understand how you use this website. These cookies will be stored in your browser only with your consent. You also have the option to opt-out of these cookies. But opting out of some of these cookies may affect your browsing experience.
Necessary Always Enabled
Necessary cookies are absolutely essential for the website to function properly. These cookies ensure basic functionalities and security features of the website, anonymously.
Functional
Functional cookies help to perform certain functionalities like sharing the content of the website on social media platforms, collect feedbacks, and other third-party features.
Performance
Performance cookies are used to understand and analyze the key performance indexes of the website which helps in delivering a better user experience for the visitors.
Analytics
Analytical cookies are used to understand how visitors interact with the website. These cookies help provide information on metrics the number of visitors, bounce rate, traffic source, etc.
Advertisement
Advertisement cookies are used to provide visitors with relevant ads and marketing campaigns. These cookies track visitors across websites and collect information to provide customized ads.
Others
Other uncategorized cookies are those that are being analyzed and have not been classified into a category as yet.
SAVE & ACCEPT
6.3K shares